Skip to content
Our primary, biggest and most important role, as a part of creation, is to be devoted to Life. Devotion here means to be in a state of acceptance of what Life has served for us. And to serve Life in return, whenever and wherever possible, by serving other forms of creation.
This perspective definitely runs counter to our normal tendency to apply intellect to decipher what Life has served us or laid out to us! Hence it may immediately seem difficult to grasp.
Here’s something to consider though! Try peeling off the layer of provider, bread-winner, care-taker, leader, mother, father, brother, sister, son, daughter, doer, undertaker, of whatever role you are essaying in Life. What is left then is the realization that you are just another aspect of creation. This is your true Self. The problem occurs when you don’t consider this role at all and instead think it is your bounden duty, it is your responsibility to solve all of your Life’s problems. Which, to be sure, you cannot in any case. Yet you foolishly attempt it. And you come back beaten, frustrated and devastated. On the other hand, when in a problem situation, when you have something to solve, if you accept the problem, may be attempt a solution, may be not, but choose to live with detachment__knowing that the fundamental reason you have been given a problem is so that you become stronger dealing with it than become cleverer solving it! 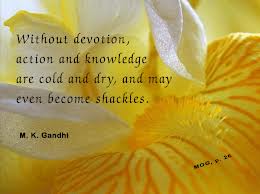 A beautiful story came my way yesterday which celebrates this point __ about devotion to Life __ and is worth sharing here.
A man was sleeping at night in his cabin when suddenly his room filled with bright light and the Lord of Life (depending on your faith, you may want to call this person God or Savior or whatever!) appeared. The Lord of Life told the man he had work for him to do, and showed him a large rock in front of his cabin. The Lord of Life explained that the man was to push against the rock with all his might. This, the man did, day after day.
For many years he toiled from sun up to sun down with his shoulders set squarely against the cold, massive surface of the unmoving rock, pushing with all his might. Each night the man returned to his cabin sore, and worn out, feeling that his whole day had been spent in vain.

Seeing that the man was showing signs of discouragement, a voice spoke up within the man’s weary mind: “You’ve been pushing against that rock for a long time, and it hasn’t budged. Why kill yourself over this? You’re never going to move it” —thus, giving the man the impression that the task was impossible and that he was a failure. These thoughts discouraged and disheartened the man.

“Why kill myself over this?” he thought. “I’ll just put in my time, giving just the minimum effort and that’ll be good enough.” And that’s just what he planned to do— but on an impulse, he decided to make it a matter of prayer and take his troubled thoughts to the Lord of Life. “Lord” he said, “I’ve labored long and hard in your service, putting all my strength to do that which you’ve asked. Yet, after all this time, I haven’t even budged that rock by half a millimeter. What’s wrong? Why am I failing?”

The Lord of Life responded compassionately.

“My friend, when I asked you to serve me— you accepted. I told you that your task was to push against the rock with all your strength— which you’ve done. Never once did I mention to you that I expected you to move it. Your task was to push. And now you come to me— with your strength spent, thinking that you’ve failed. But is that really so? Look at yourself. Your arms are strong and muscular. Your back sinew is mighty. Your hands are callused from the constant pressure; and your legs have become massive and hard. Through opposition you’ve grown much and your abilities now surpass that which you used to have. Yet you haven’t moved the rock. But your calling was to be obedient and to push and to exercise your faith and trust in my wisdom. This you’ve done. I, my friend, will now move the rock.”

This is the essence of Life. That problems come and go in our Life exactly the same way in which opportunities come and go. When we can’t do something about a problem, let’s not get frustrated. As Paulo Coelho says in ‘The Manual of the Warrior of Light’, in such situations, “make your work, even if you dislike it, your prayer”. What Life expects from us is acceptance. If we can accept what comes our way, without strife, without grief, with limited action __ only where and when we deem it necessary __ we will find peace and bliss. Our true calling is to devote ourselves to the task of living completely, despite our circumstances, with what has been served to us by Life!