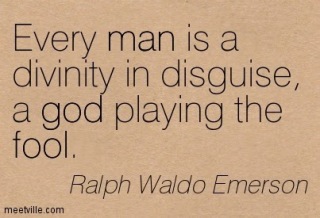 Let’s try to understand divinity by re-examining our conditioning. For instance, the way we think of garbage, sewage, filth is with a sense of distaste. Yet, there’s divinity there too. When you see fresh vegetables, you see it as beautiful, sublime, pristine. The same vegetables when they turn stale or are part of wasted food and end up in a garbage dump, you find them detestable. Similarly, when you see a sewer, you hate its sight. But there’s a sewage system in your body: your intestines and kidneys are doing just the same job__precisely. The hallmark of an evolved person is the ability to see everything and everyone as equally divine.

A hunter once got lost in an African jungle. He thought he was going to die because he could not find his way out. But he was adamant that he would not pray to God. But he did something which was half-praying and half-joking. He said to himself: “God, if you exist, come and save me!” A few minutes later, an African appeared and saved the hunter. The hunter was delighted. But that night, he wrote in his diary, “I prayed to God, but a Negro came.”!!! Neither did he know nor did he believe that the Negro was perhaps the divine intervention he had half-heartedly sought. It can be argued as a coincidence too – but coincidences too have a cosmic dimension to them!
Thay, the Vietnamese Buddhist Monk, teaches us to appreciate divinity in all of creation. A pebble, a flower, a butterfly, a detractor, a critic, a thunderclap, a garbage heap__all are manifestations of divinity that are there to help us, to awaken us, giving us a message that there’s more to this Life and the cosmic design than what we can even fathom! When you see, recognize and celebrate the divinity within and around you, you will find the God you are so relentlessly in pursuit of!