Skip to content
And whatever it is, when you find yourself down in the dumps, get up, dust yourself and move on.
A friend, who had had one drink too many, left his car keys at the bar counter while he stepped into the restroom. When he came back he didn’t notice that the keys were missing. And when he did realize this, he also discovered, to his horror, that his car had been stolen! Obviously, he felt like a worm. Very miserable. He called me this morning. And we had a long chat.
Obviously, he’s been suffering with both grief and guilt over the past week. He told me that the last few weeks have been challenging for him. He’s been having a rough time at work. He’s lost his car now. And he’s not sure if will get one of the positions he’s applied for in another company. “I just feel all this is too much for me to handle. Why should I go through what I am going through,” he lamented. 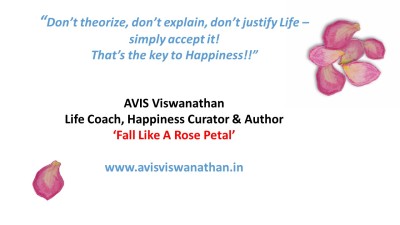 I empathized with my friend. But I told him that “why” is the most futile question to ask in circumstances where you have no control over what’s happening to you. My friend, however, was angry with himself. “Didn’t my carelessness cost me car?” he asked.  I replied: “Sure it did. But what’s the point in lamenting that you were careless. You were careless. You lost your car. Period. It is what it is. Don’t be careless again. No point in going on brooding over what’s happened. Now that the car is lost, you are no longer in control of the car or the situation. And that is the brutal truth. You have only one option here. Which is to accept what is – your carelessness and carlessness – and move on.”
As he calmed down, my friend was keen to know how much of a role determinism plays in Life. Sure enough, one argument is that determinism governs our Life to a large extent. Whatever has to happen alone happens. This doesn’t mean that free will does not have a role to play. Of course it is free will that led my friend to drink more than he should have, it was also free will that led him to the restroom and it was the same free will that made him leave his keys on the bar counter. But people in favor of the determinism theory will say all of what happened to my friend was pre-determined. It was ordained. But I don’t see a need for a debate at all. It is a waste of time. Determinism, to me, is a theory that you bring in to explain your Life when free will ceases to reasonably justify whatever’s happening to you. So don’t theorize, don’t explain, don’t justify Life – simply accept it!
The best way then to live your Life is to drop all the grief, drop all the guilt, and stop brooding on what could have been. No matter what could have been, it is always what it is. When you live Life with such clarity and a clinical detachment with the past, and with no expectation from the future, then you will be able to live in this world and yet be above it!