The Supreme Court’s recent order banning the sale of firecrackers in New Delhi during Diwali this year is most welcome. But, as it appears, it’s not quiet welcome in a family WhatsApp Group that we are part of!

Joining the mindless cacophony (on social media) of right-wingers, some members of our extended family ‘see’ the Supreme Court order as an attempt to ‘muzzle’ Hindus and promote other religions. Since the sale of firecrackers in New Delhi is banned only until November 1, and because the ban is not effective during Christmas and New Year, these self-proclaimed custodians of “culture and religion” allude that this order will, in effect, promote Christianity. One venerable member of our family remarked that “slowly children will be weaned away from Hindu culture and be converted to Christianity”. Even as Vaani and I were discussing how preposterous seemingly “well-heeled, well-educated” people in our own circle sound, a young lady, who has married into our family recently, spoke up. She said she could not “tolerate this blatant, non-secular, intolerant, Hindutva stance” in a family group and so she quit the group. Vaani and I completely support and endorse her call for sanity, for fellowship and for us all to “first be human”. 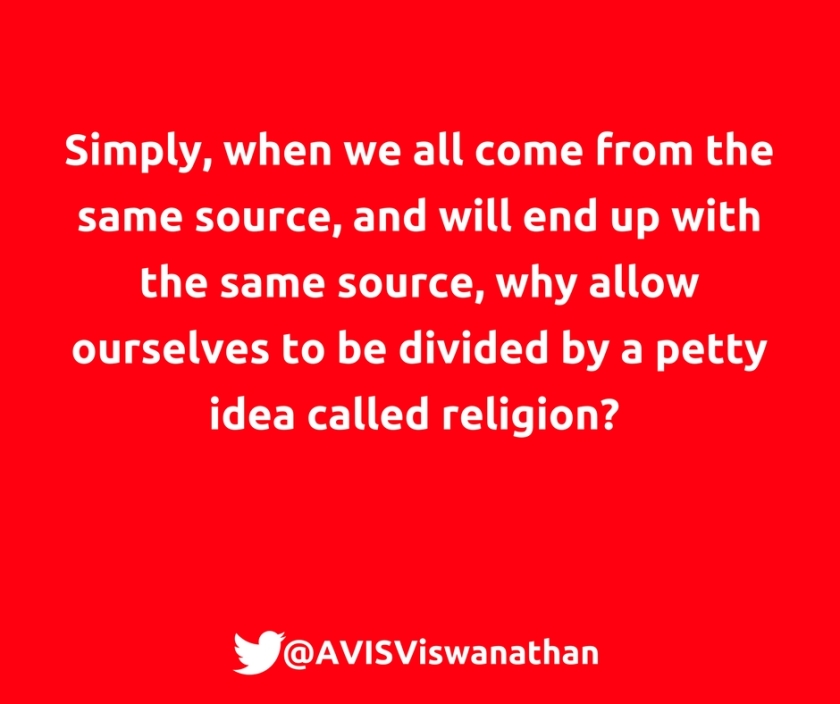 In times such as this, I wonder where are we headed as a people? Does being Hindu also now mean being anti-other-religion, anti-secular? Is being secular now the new meaning of being anti-national? If pro-Hindu jingoism has pervaded an apparently familial setting, then clearly it is the nadir for India as a secular idea. I don’t seriously understand why we don’t get it. Is being a staunch Hindu a license to run roughshod over anyone who has a different faith or viewpoint? Isn’t humanity’s altar higher than religion’s?

It is imperative sane voices speak up and be heard. I am glad someone added the young lady back in our family group. I know it becomes suffocating to hear a biased, non-secular viewpoint, especially when a majority in a group are leaning in favor of that view. But this is when we must speak up. We don’t need to necessarily raise our voice to be heard. We must raise our discourse. And so, many more like that young lady must speak up.

Here’s how I see it and I will say this again and again and again – no matter what! I was born human. I was raised as a Hindu. But I am glad I have shed my Hindu (and all religious) affiliation to reclaim my right to being just human!