Skip to content
Stay detached from the outcome of your efforts and you will be at peace. Detachment really means to be unmoved in any situation – success or failure, victory or defeat.
Team India’s Captain Cool, M.S.Dhoni, reminded us yesterday, yet again, why he is such a rare human being, player and leader. After India’s comprehensive defeat at the hands of the Aussies in Sydney in the 2015 ICC World Cup semi-final on Thursday night, Dhoni said: “Of course we are disappointed not to be in the final, but then only one team can win. Australia played better cricket today (Thursday). The Cup did not belong to us. We took it from someone and someone else will take it from us. If we had played better cricket on this particular day, we would have won.” This is the simplest, most logical explanation anyone can give in any situation like the one India finds itself in – they played a great World Cup campaign, winning seven out of seven games until losing in the semi-final. Also, when you do badly and lose a game, there are only learnings, never justifications. And finally, staying detached – as Dhoni is and has always been – from the outcome is the best way to preserve and nurture your inner peace.
Indeed, like sports, Life too is competitive. But no matter how hard you work, and how ethical you are, there will be times when you will not get what you want or perhaps even deserve. And there will be other times when you will be successful. In either situation, stay detached. Remember this: Life happens through us, never because of us. So, when we succeed at what we are trying to achieve, stay unaffected by the accolades. And when you fail at something, or rather when someone else succeeds in your place, choose again to remain unruffled. In the game of Life, someone will necessarily have to win. And it need not always have to be you!
To be sure, however, on the spiritual plane, success and failure, victory and defeat, mean nothing. Everything is transient, everything is a mere experience, and if you pause to reflect deeply, everything is an impermanent illusionary experience! So, don’t fall for the bait and get attached to outcomes – stay detached. In any situation, you have only your efforts to focus on and count on. Here’s how you deal with your efforts:
–       Good efforts and you succeed at the task – take it easy
–       Poor efforts and you succeed at the task – take it easy
–       Good efforts and you fail at the task – take it easy
–       Poor efforts and you fail at the task – take it easy
Take it easy every which way. Learn every single time. Remember this too: as Dhoni recounted and the Bhagavad Gita says, “Nothing belongs to you. And nothing will be with you forever. What is yours belonged to someone else yesterday and will belong to yet another tomorrow!” So, stay detached. Stay in peace.
Are you in possession of something or is it in possession of you?
So very often we get attached to things. Every attachment fuels a desire to control. To possess. To own. Unknown to us, we end up being possessed by it! There are people who are worried about their status and prestige in society. To them, being humble, being ordinary, being vulnerable is suffering because they are constantly worried about what others will think about them. They no longer earn their status, they are controlled by having to keep it! Some are attached to their property, their car, their phones, their desks, their cameras and sometimes, to their opinions. Even attachment to an idea can cause suffering. 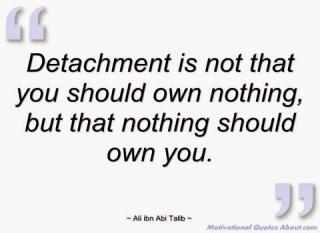 For instance, some have an idea that they will be happy subject to certain conditions being fulfilled. So, if those conditions are not met, they will be unhappy. This applies to habits too. Are you owning a packet of cigarettes or is it owning you__when you are in a no-smoking area and your mind is on the packet with you and on your craving to smoke, it is controlling your every thought, isn’t it? There’s a poem that describes The Buddha thus: “The Buddha is like a full moon sailing across an empty sky.” Meaning that The Buddha’s happiness was immense because he possessed nothing.
When our mental landscapes are full of things that we possess__ideas, material objects, opinions, habits, worries__we are no longer in charge of our lives. When we let go of every single thing we possess__physically, literally, figuratively and metaphorically__we will be blissful. This does not mean abdication. This means remaining detached so that we too can sail with abandon in the beauty of this wondrous Universe.
When something gets taken away from you, let it go. If it’s a person who chooses to leave you, let that person go too. When you let go, and don’t cling on, you will not suffer.

There’s a poem that describes The Buddha thus: “The Buddha is like a full moon sailing across an empty sky.” Meaning that The Buddha’s happiness was immense because he possessed nothing. When our mental landscapes are full of things that we possess__ideas, material objects, opinions, habits, worries__we are no longer in charge of our lives. When we let go of every single thing we possess__physically, literally, figuratively and metaphorically__we will be bliss. This does not mean abdication. This means remaining detached so that we too can sail freely in this big, beautiful, bountiful Universe.
Be cool. And you will be in bliss!
Sometimes you have no choice but to accept the Life given to you. You have tried everything humanly possible to fix your situation. To solve your problem. But the problem refuses to let go of you. Be cool in such times! Be in bliss.

How can you be cool when someone you love is dying? How can you be cool when your teenaged child is insistent on being in a relationship that you know is ruinous? How can you be cool when your companion is cheating on you? How can you be cool when the world, perhaps your world, is inching towards an apocalypse?  How can you be cool when there is so much injustice around you, when people are being selfish, cold and cruel?
Good questions. But think about it. Sometimes, you don’t have a choice! You simply will have to accept the reality of what is, take a deep breath and attempt a new solution if you can think of one, or simply wait for time to turn. Which is, wait for your time to change! Intelligent living is never about applying YOUR intelligence to Life. It is about being intelligent in letting Life be. There is an ancient Zen saying: “Even in a fire the man who has attained satori remains cool.” ‘satori’means enlightenment. And this doesn’t mean wearing an ochre robe and growing a flowing beard or shaving your head of. It means being aware of the intrinsic nature of Life!
There’s a story which comes to mind. A wise sage had heard of the Captain Cool legend of the famous King Janaka who ruled from Mithila (present day Janakpur, Nepal) over Videha. Janaka was known for never being flustered with any situation. And so, like Indian cricket captain Mahendra Singh Dhoni, he was called Captain Cool. The sage was intrigued by Janaka’s legend and so came calling one day. The King received the sage with full honors and left him in the guest room of his palace and promised to return after attending to important matters in his court. The sage meanwhile bathed and freshened up. He had only his loin cloth on him which he washed and left to dry in the sun. He stitched a small skirt of mango leaves to cover himself and sat in deep meditation. Janaka finished his meetings and came to the sage’s room. When he saw the sage in deep meditation, he prayerfully sat opposite him awaiting the sage to open his eyes. An hour or so must have passed when screams rent the air.  “The palace is on fire and it has started in the kitchen abutting the guest room”, screamed someone. The King remained unruffled. There was a lot of noise and smoke around them but he kept sitting focusing his gaze on the sage. The sage leapt up when he made sense of what people were saying and screamed at Janaka: “How can you remain so cool, when your palace is on fire? Wait! Let me save my loin cloth which I put out to dry and then we both will run for our Life!” Janaka still was non-plussed! When the sage returned in a moment with the loin cloth and the two men rushed out of the burning guest room, the sage again asked Janaka the ‘secret of his coolness’. Janaka replied: “Every moment I am ready to depart from this planet, giving up this lifetime. And I know I will take nothing with me when I go. So, why grieve over anything which is not going with me in any case?”
Indeed. Why grieve, why attach yourself to, over anything that’s not going with you in any case? So, be cool about anything that may happen to you. And surely you will be in bliss!
Follow The AVIS Viswanathan Blog on WordPress.com
Follow @AVISViswanathan