Skip to content
Every once in a while step aside from your Life and observe yourself. As a third party. You will then discover how much you have to change for your Life to change!
We met a young lady recently who is obese, has hypertension and complained of her inability to stay focused. She said she is simply not able to prioritize and manage her time and tasks effectively. Many people are in this young lady’s situation – grappling with their home and work schedules, unable to find time for themselves, coping with lifestyle-related challenges like diabetes and hypertension and, overall, just going through the paces of Life, never really being able to live it fully! There’s only one way such people can “re-engineer” and “reinvent” themselves. They have to learn to be mindful. It’s an art – and it can be mastered with understanding and practice.
Mindfulness is the ability to be, to stay in the present moment. Many a time, we keep doing stuff – cooking, cleaning, driving, smoking or eating. We don’t concentrate on what we are doing. Our mind is elsewhere. Our activities then are just chores. Which is why we are unable to “see” that what we could be doing is “ruinous”. We know, for instance, that smoking is ruinous, over-eating is ruinous, not exercising is ruinous. But we go on doing these things. Mindlessly. Which is why observing your own Life, and viewing it dispassionately as a third party, helps. When you observe yourself you will realize how mindlessly you go through your days. You simply are going through hurried motions. You are not present in any of your actions. You are merely activity-driven. You are never in the moment. For instance, you are working overtime to send your kids to school – but never pausing to celebrate and enjoy their innocence. You are rushing to finish your bath – but are never enjoying your body. You are eating in a rush – but are not tasting and relishing your food. You are texting away madly – but are never celebrating how much smaller the world has become thanks to facebook and WhatsApp. It is only by being mindful in each moment that you can really understand what about you needs to change.

Try a simple exercise in mindfulness. Make yourself a cup of green tea. And drink it patiently enjoying every sip. Feel the tea energize you as it enters your body. Don’t let your thoughts wander. Be focused on the experience of drinking that tea. Examine how you felt while drinking it. This experience of being one with the tea, this feeling, is what mindfulness is all about. Follow this method in everything that you do. When cooking, focus on the recipe and its preparation. When driving focus on the road and the joy of navigation. When on facebook, celebrate the opportunity to connect with the world, your world. Every time your mind wanders, to a past event and makes you feel guilty or to a future event and makes you anxious, bring it back to attend on whatever you are doing now. Remember the human mind is like the human body. It will resist any change first. But repeatedly bringing the mind back to focus on the present, you can train it to let go of the past and to not indulge in the future.
When you are fully present in each moment, you are alive in it. It is only then that you are living the moment fully. When you live each moment fully, you will realize its value. And through this realization, you will be able to transform yourself – your work, your schedules, your health and your Life!
Where there is uncertainty, there will be creativity and progress. Where you seek certainty, you will be held hostage by fear, anxiety, stress and suffering.
Not knowing what comes next is what makes Life a wonderful adventure sport. Just like you wouldn’t want to spoil the fun by knowing the plot of a movie in advance from friends or by reading a review, don’t try to pre-suppose or find out what Life will deal you next. Just dive into each moment, each day, with total readiness to meet__head-on__whatever comes next.
Erich Fromm, German-born American philosopher (1900-1980), says, “The quest for certainty blocks the search for meaning. Uncertainty is the very condition to impel man to unfold his powers.”

Where there is acceptance of uncertainty, there will be a paradoxical sense of security and peace within. So, the best attitude to take into each moment of Life is innocence, a child-like view of seeing the Universe with amazement, surprise and being accepting of whatever happens. Allow the uncertain future, which will nonetheless unfold, to take you into its embrace and to soak your soul in adventure. Enjoy uncertainty. Welcome whatever happens gleefully. Move from the mind__so stop rationalizing and analyzing each development__into the moment__simply living each one fully, blissfully!
No job or activity is dull or boring. Something becomes boring only when your attention wavers.
This is what I have learned from my guru, Eknath Easwaran (1910~1999). He has taught “Passage Meditation” as a way to reign in the mind, so that it attends to whatever you are doing and experiencing in the present moment. I have understood, from my own experience, that this is possible. The key is to immerse yourself in whatever you are involved in. It may not always be what you love doing. But if you have to do something, do it with full awareness – lose yourself in the process. When you are lost in whatever you are doing – you are living fully, you are then (in) bliss! 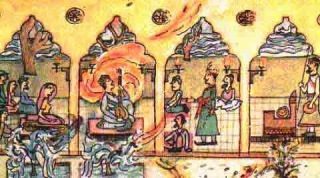 A very accomplished musician once accepted a King’s invitation to perform in the royal court. The King had been inviting the musician for years. But the singer was always elusive and reclusive. Finally he agreed. But he laid down a condition – nobody should nod their head or sway or even move when he sang. The King was a maverick himself. He immediately announced that if anyone violated the singer’s condition, he or she would be beheaded. The people of the land, who were eager to listen to this singer, for it was indeed a-once-in-a-lifetime-opportunity, were taken aback. Many of them felt that the condition stipulated was draconian and could not be fulfilled at all. How can you not nod or move when you hear great music? So, they backed out of attending the concert. Several people, however, still showed up on the morning of the performance. The King had stationed soldiers, who had their swords drawn, all around the royal court. The singer arrived. And he sang. It was magical – he sang with such purity, such class. Everyone in the audience froze. It was not hard to say if they remained unmoved because the singer held them in his spell or if they were that way fearing his condition and their King’s absurd order! Soon, as time went by and the concert became even more blissful, a few heads swayed, then some more and then some others even moved their hands and blew flying kisses to the singer. The soldiers made a note of every person who violated the King’s order. As soon as the concert ended, they rounded these people up separately and looked to the King for his order to behead them – then and there.
The musician however told the King to let these people go.
The King was not amused: “But these are the people who have violated your condition and my order. I don’t understand this!”
The musician replied: “They did. No doubt about that. But they did so only because they lost themselves to the music, in their inner joy! They are the true listeners. They risked their Life for their bliss. Those who did not move were always thinking about the order, fearing for their Life, and worried about the soldiers with their swords drawn. How could these people have even listened to my song, let alone enjoy it!”
The musician told the King that in future, whenever he visited, he would sing only to this select audience.
The import of this story is that when you are totally immersed in the moment, even Life becomes insignificant and inconsequential. When you are engaged this way, worry, grief, guilt, anger, fear – nothing can touch you. Because, in that moment, you are (in) bliss!
Follow The AVIS Viswanathan Blog on WordPress.com
Follow @AVISViswanathan