Skip to content
If there’s one practice that you want to develop in Life – learn to be silent for at least an hour daily. This practice is called ‘mouna’.
Most forms of meditation require that you silence the environment before you begin to still the mind. But ‘mouna’ does not require the environment to be silent, it requires you, your mind, to be silent. It instils in you the capability to be just an observer of your own Life. Being an observer means not to pass judgment, not to evaluate, not to condemn and not to appreciate. An observer just is.
The human mind is always trafficking thoughts. Of all kinds – relevant and irrelevant, both at all times. 24 x 7. Research reveals that the average mind thinks 60,000 thoughts a day – and all of them are soaked in worry, anxiety, fear, anger, grief, guilt and sometimes, some of them are happy and peaceful thoughts too. ‘mouna’helps in organizing this traffic and ensures that through your inner awareness, you detach yourself from your situation and simply be an observer.
Let me share a story that I have read in one of the books that Osho, the Master, wrote.
One morning Gautam Buddha was talking to his disciples. The king, Prasenjita, had also come to listen to him. He was sitting right in front of the Buddha. Prasenjita was not accustomed to sitting on the floor – he was a king, you see – so he was feeling uncomfortable, fidgety, changing sides, somehow trying not to disturb and not to be noticed by the Buddha because he was concerned that he was unable to sit silently, peacefully. He was continuously moving the big toe of his foot, for no reason, just to be busy without business. Some people are like that – they cannot be without business; they will still be busy!
Gautam Buddha stopped talking and asked Prasenjita, “Can you tell me, why are you moving your big toe?”
In fact, Prasenjita himself was not aware of it. Sometimes, you – and I – are doing a thousand and one things that we are not aware of. Unless somebody points at them, you may not take any note of it.
The moment Buddha asked him, the toe stopped moving. Buddha sought to know, “Why have you stopped moving the toe?”
Prasenjita said, “You are putting me in an embarrassing situation. I don’t know why that toe was moving. This much I know: that as you asked the question it stopped. I have not done anything – neither was I moving it, nor have I stopped it.”
Buddha said to his disciples, “Do you see the point? The toe belongs to the man. It moves, but he is not aware of its movement. And the moment he becomes aware – because I asked the question – the very awareness immediately stops the toe. He does not stop it. The very awareness, that ‘It is stupid, why are you moving it?’ – just the awareness is enough to stop it.” 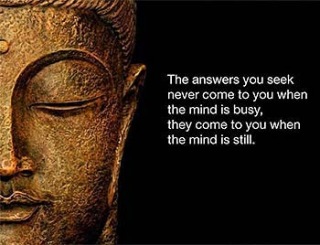 This is really what ‘mouna’, and your being an observer, can help you with. It can help you realize that you too can be ‘aware’ – and so too can stop doing many things that you go on doing, just like that. Worrying incessantly is one of those things that we all do – many a time without knowing that we are worrying. When you learn to still the mind and organize your thoughts, you learn to weed out worry. When you step outside and assume the role of an observer, you will see the futility in investing your precious lifetime in debilitating thoughts. When the observer in you becomes active, the mind becomes slowly powerless. Through your continuous practice of ‘mouna’, you eventually learn to fully still your mind, making it totally inactive. It is in that 100 % observer state that you discover the secret to living happily and at peace with what is!
Be yourself. Don’t try to become someone else. Drop the urge to “become” and simply “be”. That’s Buddhahood.
Gautama, the Buddha, himself has said this: “Doubt everything. Find your own light.” What this means is that you shouldn’t get carried away by others’ experiences or philosophies. You have to challenge every assumption, question every logic, convince yourself how (your) Life works and accept your own convictions and beliefs.

But this is not the way we have been raised. Everything we do is what we have been “told” to do. There’s very little scope or opportunity to make our own music, pave our own paths and to live our lives as if we were explorers and not followers. Which is why, when you fare badly in academics, you are condemned. I, for example, was thrown out of school and that led to my parents feeling “embarrassed” on my account – their feeling so changed my Life forever. Society’s expectations from us are far removed from the way the Universe works or has planned things for us. According to the Cosmic Design, everything is in its place and everything’s perfect. The Master Plan has no flaws. Society – family, friends, community – says, however, you are not good enough. You must be this way or that way or like him or her. If you succumb to this pressure, you give up being who you actually are. You get trapped in the “becoming game” – wanting to become something that you are either not capable of or interested in becoming – instead of simply being. If you accept who you are, if you stop wanting to become (something, someone) and simply be, that’s Buddhahood.
This is not at all complicated. Simply ask yourself what gives you joy and go do it. You can keep your job, do whatever else you have to do to  discharge your “worldly” responsibilities, and still if you can devote some time to do what you love doing, you have made progress. Doing this, now that you have experienced inner joy, keeping doing more of that stuff. When you do more and more, and then eventually do only that which gives you joy, then you are yourself! You are not trying anymore to become someone else for society’s sake, for family’s sake or for money’s sake. When you live the Life that you enjoy living, that’s Buddhahood.
The Lotus Sutra is the most profound scripture in Mahayana Buddhism. And the defining doctrine in it is the belief that all people can reach an enlightened state. The key to this enlightenment, as I have learnt, is to drop all notions that your Life is imperfect and that you have to do something, become someone else, to make it perfect. Just accept your Life the way it is, accept yourself the way you are, don’t judge, don’t reject, don’t condemn, don’t try to become. Experience everything. Then choose what you love doing. And then keep doing that. Just being yourself.
In your acceptance of your Life the way it is and of yourself the way you are lies you Buddhahood – and your bliss!
Follow The AVIS Viswanathan Blog on WordPress.com
Follow @AVISViswanathan