All mistakes offer learnings. Beyond that, they serve no purpose.

Do I ever feel guilty? I was asked this question by someone recently.

Of course, I do. I feel guilty for having made such costly mistakes that led me and my family to this bankruptcy, I feel guilty for failing my parents and my children, and Vaani, and I do feel guilty for our inability to repay the 179 people to whom we owe money (Read more here: Fall Like A Rose Petal ). I sure feel the guilt. For the longest time, until some years ago, I used to carry the guilt. But upon deep reflection, I have set down that burden. My awareness has helped me understand the futility of feeling guilty.

Sometimes we make mistakes in Life that we do realize later were avoidable. In fact, in retrospect, when realization dawns, every mistake seems avoidable. Realization, always, brings guilt in its wake. This is when we must be aware and drop the guilt. We often confuse feeling guilty with a sense of feeling responsible. The truth however is that feeling guilty for long periods of time can be depressing and can cripple us – preventing progress. On the other hand, feeling responsible about or for something brings with it a sense of accountability and helps us take the necessary action to remedy the situation.

But some situations may not be immediately remediable. A friend writes in saying he made a judgment error in quitting his last job. Now, even while he’s struggling without a job for over six months, he’s drowning in a sea of guilt. Without an income and a family to support, he has become depressive and is very scared of the future. He keeps repeating that he should not have quit his last job in a huff. This is what guilt can do to you. It will keep you chained to the past. Also your ego, which will fuel that feeling that you must atone for your sins, will blind you. This way you will miss the completely magnificent present. A situation like the one my friend is facing is unpredictable – it may sort itself out with him getting a job soon or his career can stagnate this way for a long, long time. Holding on to guilt till a situation gets better is wasting a crucial opportunity to live Life fully. Interestingly, feeling guilty about a situation cannot remedy it. Only concrete, constructive action can.

When you feel guilty about something you have done, look at the situation deeply. Ask yourself could you have avoided doing what you did or could you have done something different. Once you realize that you could have avoided doing what you did, first forgive yourself for having done that. Resolve that you will not repeat this mistake again. Then reach out and apologize to all people connected with or affected by your action. Whether they forgive you or not is immaterial – you apologize. If you can’t face them, send them a text message or an email or a note. Beyond this, don’t retain your guilt. Holding on to your guilt pins you down. Drop your guilt instead and move on. Know that everyone makes mistakes. And that mistakes are experiences from which you can learn. As long as you have learnt from it, the mistake you have made, no matter what it was, has served its purpose in your Life.

Life is too short and beautiful to be brooding over and feeling guilty. Instead drop your guilt, come alive, take charge and make every effort to change the situation. No matter how long it takes to turn things around, remember, you have no choice but to be at it. And, without doubt, you can be better at the task of repairing your Life, in any context, when you are free from guilt.

One of the first lessons we are taught in school is “Don’t judge a book by its cover”! But that’s precisely what we do.We do it all the time. We are always judging someone or something __ events, governments, government policies, sporting teams, movie stars, politicians, children, parents, siblings, companions and partners.
Why do we judge? Because judging is free. Nobody is stopping you. So you indulge in pronouncing judgments. It comes easy. It is exciting. It gives you an air of superiority. That superior feeling you may not be seeking consciously at all. But your subconscious loves it. You feel like an exalted member of the jury, looked up to by your own private circle of courtiers, while pronouncing someone guilty.
And why do we loathe being judged? Because you almost always are being judged for a single act and not for the real person that you are. Let’s say, in a country like India, in a city like Chennai, where autorickshaw drivers are known to fleece people, you are seen haggling with an autorickshaw driver for about Rs.20/- (less than 50 cents). You are attired in business formals, are carrying a laptop bag and looking every inch a well-heeled white collar manager. Two people passing by, who are new to Chennai, watch you haggling. One of them tells the other that he thinks you are a miser who is finding it difficult to part with Rs.20/-! You hear that comment and feel hurt. Why? Because your fight with the autorickshaw driver is on a matter of principle and not a function of affordability. That you are a man of principle is not being considered by the opinion-makers. That you are a miser, which you believe you are not, is what they perceive. So, you hate being judged because it is never based on the complete reality though it may well be based on some sound perception! When you are judged, you feel like a worm. You feel like a criminal, standing helplessly in the dock, who’s being judged and indicted without the full story being heard!
The simplest way to avoid judging is to put yourself in the shoes of the person being judged and ask if you would have liked to be talked about that way! This is not easy to do. But it is simple. Over time, employing empathy and compassion, you can kill your urge to judge __ yourself and other people! 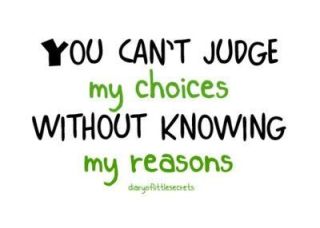 No one is perfect. No one is complete. No one is a saint. And no one is a born villain. Left to themselves, even the people who commit heinous crimes, who are tried, judged and punished by law, may not have ever wanted to end up that way. Given a choice, they would not have wanted to commit those acts at all or they may well want to undo those acts. Take Oscar Pistorius for example. Who would have thought this global icon would have ended up facing charges of murdering his girlfriend? In his statement he has said, “I am absolutely mortified by the events and the devastating loss of my beloved Reeva…I cannot bear to think of the suffering I have caused her and her family, knowing how much she was loved….” Pistorius has his own reasons, his own defense for shooting at Reeva (as he says, accidentally) and the court trying his case will focus more on the act than the person he is. In fact, that is the way law is drawn up in all parts of the world. Where the criminal act, with the related evidence, coming into weigh more on the final judgment than sentiment. The judgment rarely indicts the person. It merely punishes the act, though the person who committed the act is pronounced guilty of it!
Perhaps there’s a lesson from the legal system here for all of us who indulge in recklessly and wholesomely judging people. Perhaps, it’s also a good idea to fundamentally evaluate whether judging people, including ourselves, is worth it at all? A lifetime is a much bigger, vaster, varied experience. A single act may well mar and scar a person’s reputation __ as we found in the case of Shiney Ahuja or Tiger Woods or Bill Clinton __ but cannot incinerate a lifetime of work. So much time and emotion is wasted in judging. So much so, that sometimes, we end up judging ourselves and plunge into either depression or float in a fake sense of exaggerated self-importance. 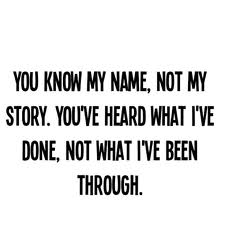 This does not mean that we should not step in when we see someone headed in a wrong direction. We sure must. A teacher must judge the performance __ both academically and morally __ of her ward and prevent and prohibit factors that inhibit good performance. Don’t judge does not mean don’t correct. It means don’t condemn. It means don’t dump. It means focus on the act and still respect, love and appreciate the person for who she is. Place the act not in the backdrop of your morality, your virtuousness or your principles alone, but in the context of that person’s well being and the well being of the people in his or her circle of influence. For all the same or similar reasons, should you agree with them, don’t bother about being judged. Because if you are being judged, there can be two reasons. One, your actions must have led to the judgment. Second, the people judging your actions may be less evolved and may have ended up condemning you wholesomely. Either way, it doesn’t change who you are. So, live with that truth and make peace with yourself that way!
To judge __ others or yourself __ is as heinous a crime as the act being judged itself. It is wasteful, regrettable and, therefore, imminently avoidable. Instead, a better position to take is to be a witness. A silent observer. No opinions. Just quiet learning. Take what you want to take from that person’s action or experience and discard the rest. Most important, when you are a mere observer, there is no anguish, no pain, no suffering, no victim, no villain…there’s just you, in total bliss.
Follow The AVIS Viswanathan Blog on WordPress.com