Skip to content
There’s no need to respond to every insult, every jibe at all.
In fact, there is no need to say something to counter whatever someone has said at all. However, if you think you are not evolved enough, and therefore are unable to be forgiving, the least you can do is to avoid responding, retaliating and getting even with everything that someone has to say. These conflicts happen endlessly, each day. Someone shows you his middle finger on the road. An impudent teen scowls at you because you questioned why she jumped the queue you were waiting in. A neighbor accuses you of violating their privacy last night because you had guests over and the music volume was higher than usual. An irate boss says you are not performing as well as you should be. Some of these events may have happened even though you did not contribute to or cause them. Which makes it often all the more difficult to handle. Your initial sense of shock fades into anger and you want to ‘get even’. And then one thing leads to another. Pretty soon, you are either sulking or fuming. 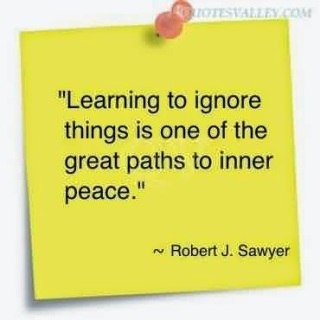 In the overall scheme of Life, such conflicts are simply not worth entering into and are not worth your time or attention! Here’s a Zen story that teaches us how to deal with such ignominious situations. There once lived a great warrior. Though quite old, he still was able to defeat any challenger. His reputation extended far and wide throughout the land and many students gathered to study under him. One day a young warrior arrived at the village. He was determined to be the first man to defeat the great Master. Apart from his strength, he had an uncanny ability to spot and exploit any weakness in an opponent. He would wait for his opponent to make the first move, thus revealing a weakness, and then would strike with merciless force and lightning speed. No one had ever lasted with him in a match beyond the first move. Much against the advice of his concerned students, the old Master gladly accepted the young warrior’s challenge. As the two squared off for battle, the young warrior began to hurl insults at the old master. He threw dirt and spit in his face. For hours he verbally assaulted him with every curse and insult known to mankind. But the old warrior merely stood there motionless and calm. Finally, the young warrior exhausted himself. Knowing he was defeated, he left feeling shamed. Somewhat disappointed that he did not fight the insolent youth, the students gathered around the old Master and questioned him. “How could you endure such an indignity? How did you drive him away?” “If someone comes to give you a gift and you do not receive it,” the Master replied, “to whom does the gift belong?”
So, the simple takeaway is, don’t accept gifts__of insults and rebuke__that you don’t want! Just walk away….mindfully, peacefully….
Follow The AVIS Viswanathan Blog on WordPress.com
Follow @AVISViswanathan