Skip to content
The most evident truth about Life is that it simply goes on! And you and I are like the ‘musafir’ (voyager) in the opening song of Parichay (1972, Gulzar)…we have to just keep walking…‘bas chalte jaana’…!

This is the big message I picked up watching Masaan(2015, Neeraj Ghaywan) the other day. It is the most thought-provoking, poignant film I have seen in a long, long time. It deals with a young lady coming to terms with the death of her boyfriend when the police raids their room in which they are making love. A parallel story deals with a young boy, from a lower caste (his family burns corpses at the riverside crematorium), aspiring to woo, court and marry an upper caste girl. The girl is willing but soon dies in a bus tragedy along with her entire family. The boy struggles initially to reconcile with his loss – he ends up having to cremate her body! But eventually he manages to move on. Both story arcs converge as the film ends, with the young lady meeting the young boy on a boat and together they ride onward…
Set in Benares, Masaan has been winning acclaim on the international film festival circuit. And has earned praise from critics and viewers alike.
To me, however, Masaan portrays the ever-flowing nature of Life. The young lady has to handle her guilt, her grief, over a choice she and her boyfriend made. Her father has to live with the ignominy of her choice. Together they have to face a corrupt cop and raise a ransom amount for the charges against the lady to be dropped. She tries to seek closure by going over to apologize to her boyfriend’s family, but they don’t want her apology; they ask her to get out! In the parallel story, the young boy has his father’s support to quit the corpse-burner tradition and profession. He has his girlfriend’s assurance that she is willing to even run away – should the families disapprove – with him provided he gets himself a job. He’s almost certain of getting that job when she dies. He has to deal with his demons. His depression almost ruins his career prospects and he’s on the verge of being a corpse-burner all his Life. But he realizes that unless he moves on, he will only be trapped ‘where he is’ and remain depressed. A state that will serve no purpose, he reasons. So, with great difficulty, he picks up the threads of his Life and lands himself a job. As both the young lady and the boy move on, they meet each other…
Indeed, there are no pauses in Life. It simply goes on. As long as you are alive, you have to keep walking, you have to keep going with the flow. You may not like whatever is happening to you. But you have to face it, you have to live through it. When you hate whatever is, you will suffer. Here’s the nub: you can’t prevent Life from happening to you. But you have the choice not to resist Life. And nothing, nothing really, is the end of the road, until you are alive, until you die. Period. 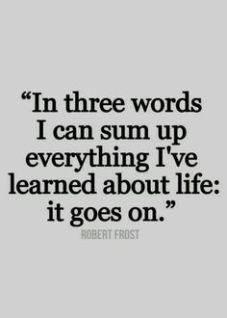 I talk from experience. On December 31st 2007, when I sat with Vaani in our bedroom and surveyed our Life, it seemed impossible to go on. We had just Rs.2000/- left with us in Life. And we had over a million dollars in debt. And no work. Yet, almost 8 years on, we have survived and lasted to tell our story. We still don’t have enough work – not even enough to cover our living expenses – and our debt remains unpaid. But we move on…living each day, working hard, facing our realities – court cases, police complaints, cashlessness at some times and very frustrating material scarcity at others – and believing that all this too shall pass.
There is no other way to live Life. It is what it is. You have to accept what is, keep working on what you want it to be and, in the process, exercise your choice to simply be, well, happy with whatever is. It is when you don’t live Life with this clarity and understanding that Life is miserable. Go on, go with the flow of Life. After all, there’s isn’t any point in refusing to flow it!
Follow The AVIS Viswanathan Blog on WordPress.com
Follow @AVISViswanathan