Skip to content
To live a Life of meaning, you must first understand the meaning of Life. And the truth is, in reality, Life has no meaning. Think about it – what kind of a meaning does Life offer when you are born, without choice, empty-handed and you have to die, again empty-handed; even all the experiences that you have during a lifetime and the learnings, they would seem futile because no one knows if there is an afterlife and if you will even remember any of these in that Life!!! So, the whole Life experience is meaningless at one level. But there’s every opportunity to create your own meaning in Life. To do that, though, you must participate in and with Life.
Most people find their lives listless, meaningless, because they are passive. They are lost in earning-a-living, as opposed to living. Earning-a-living is but one aspect of Life. But if you get obsessed with that one single aspect then you lose yourself to its trappings – worry, anxiety, fear, insecurity, sorrow, grief, anger, jealousy, hatred! Then you are not living. You are merely existing. 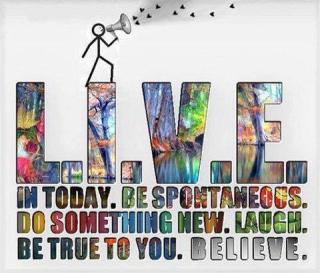 To participate in Life, be with it in each moment! Whatever Life throws at you, be with it. Don’t be lost in your idea of Life. You will never find it. Because Life conforms to no (one’s) fixed idea. When you say and expect that Life has to be this way only – you have surely consigned your lifetime to misery and suffering. Because Life’s not going to oblige. Instead be open to receiving anything in Life, from Life, in totality, fully. Let your energy flow into Life’s every moment. Something makes you exult, rejoice over it. Something makes you sad, grieve over it. Whatever makes you offer yourself fully to Life, as it is happening to you in a given moment, do it. Don’t stick to one idea of Life, else you will get stuck in a rut!
There’s this beautiful story of the Hassidic Master Baal Shem. It was a holiday and several of the Master’s faithful followers had gathered for a communion.
A man had come with his retarded son. He was a little worried about the boy. He was worried that the boy may do something embarrassing. So he was keeping an eye on the boy. When the prayers were said, the boy asked his father, “I have got a whistle – can I play on it?”
The father said, “Absolutely not – where is your whistle?” Because the father was afraid that the boy may not even listen to his “no”. The boy pointed to his trouser pocket, that revealed the bulge of the whistle and the father kept his hand on the son’s pocket to ensure that the boy does not get adventurous.
Soon, Baal Shem led the congregation to ecstatic prayer. Then there was dancing, and the father forgot about his son’s whistle – taking his hand off his son’s trouser pocket – and he also started dancing. Hassids in prayer are dancers, joyous people – the very idea of Judaism is to let go, to be free, to dance as if there’s no tomorrow. When everybody was praying to God and dancing, suddenly the boy could not resist it any more. He pulled out his whistle and blew on it. Everybody was shocked. And the father was embarrassed. But Baal Shem came up to the boy, hugged him and said: “Our prayers are heard. Without this whistle, all was futile – because this was the only spontaneous thing here. All else was ritual.”
There’s a huge learning here for each one of us. Are you living spontaneously like that boy? Or are you trapped in your own rituals – even if you are subconsciously? Do you feel like doing something else – like dancing or singing or blowing a whistle – but restrain yourself because you think you have ‘outgrown’ that stage or think it to be ‘inappropriate’ to do such a thing? Why not abandon all fixed notions and ideas you have of Life and stop searching for meaning in Life? Instead simply let go and create your own meaning of Life! And if that requires you to blow your whistle, whenever you feel like it, you possibly simply MUST!
Follow The AVIS Viswanathan Blog on WordPress.com
Follow @AVISViswanathan