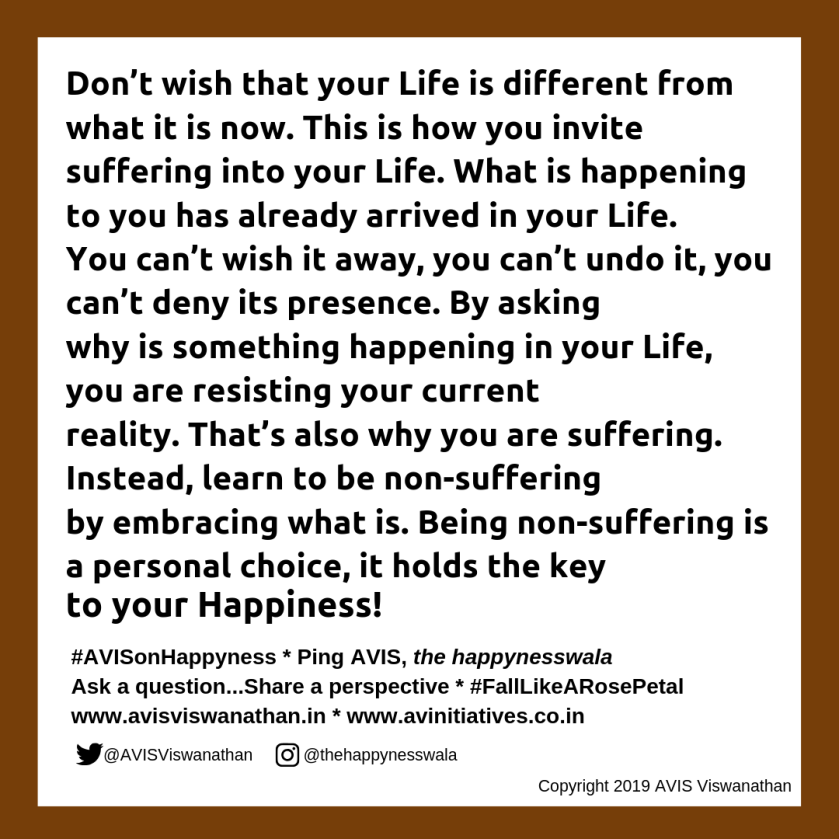 If you can’t enjoy it at certain times, learn to endure it while not resisting it.

In Palaghattan lingo (native to TamBrams hailing from Palakkad, Kerala), there is a phrase called “chatyam pidikarthu”. It means to “behave like a spoilt brat – adamant and obstinate”! Exasperated parents often use a variation – “chatyam pidikathey ‘tya” – (“Don’t behave like a spoilt brat, ok?!”) to admonish their children who are protesting vehemently when they are denied toys or food or anything that they immediately want.

I was reminded of this phrase when someone I know called me to a while ago. The caller referred to his cousin who continues to “brood, mourn and sulk” over his inability to get a job. “This has been going on for months now. My cousin has been refusing to heed any reason, he just goes into a dark hole and refuses to come out,” said the caller.

People who are sulking or brooding over their Life situations usually are very strong-willed. They like to have everything under their control. They can’t imagine that their efforts are not bearing fruit. So, they continue to fight Life, often by being angry with Life. In a way, to marry Palaghattan with colloquial Tanglish usage, “chatyampidichufying” with Life is of no use. Life is never bothered about how you are feeling. Whether you exult or mourn, Life couldn’t care less. It just goes on and on, doing what it pleases. And whatever you resist, not just persists, it causes all your suffering. So, while a Life event or a phase that you are going through may cause you intense pain, you suffer only because you are adamant and obstinate, you suffer only because you wish things were different from what they are. But if you think about Life deeply, it is always what it is. And all your bawling, your sulking, has no impact on Life. When a child acts cranky, demanding attention or that a wish be fulfilled, a parent usually relents immediately. But Life has no such compulsions or sense of urgency. No matter how much you sulk, how long you brood, how depressed you are, Life happens only at its own pace, in its own time, happening only the way it wants to happen.

Simply, “chatyampidichufying” with Life, fighting it, is a zero-sum game. Instead flow with it. If you can’t enjoy it at certain times, just learn to endure it. That’s the key to avoid suffering and to be happy!

Don’t cling on to anything – or anyone – that makes you suffer!

A reader asked me this question: “What do you do when your husband of 30 years lets you down?”

I know it is easy to advise someone to move on, but let go does not come easily when there has been a let down. Yet, in most instances, it is the only option you have to protect your inner peace.

Grief, anger and a sense of worthlessness accompany a let down. The fact that you have been taken for granted, treated like a piece of s**t, used, pissed on, passed over and trampled upon – all these come together to puncture your self-worth. You feel miserable. And I want to tell you that it is perfectly alright, natural, to feel that way.

I have experienced let downs too. In professional contexts. And in a very personal relationship – with my own mother. (Read more here: Fall Like A Rose Petal). So, I am sharing here what I have learnt from my own lived experiences. I was haunted by my let downs each time only when I clung on to the hurt.

To be sure, you will be hurt when you are let down. The pain cannot be avoided. But look at the situation dispassionately. The other person did what they did to you only because they wanted to do it – to them, therefore, their action did not look inappropriate or wrong. What is the point in grudging the actions of someone who does not even know that they are doing something that may hurt another? We have to also realize that people change – all the time, over time. Just because someone was one way some years ago, it must not be assumed, or expected, that they will be that way forever. When people change the way they think, they change the way they behave too. So, when you are let down in a relationship, you are questioning someone’s current actions while comparing them to their past actions, to a past that is over, that is dead. The irrefutable truth is that the person who you believe has hurt you has left you behind and moved on long, long ago, while you are still living in that dead past! That someone has looked outside of the relationship, or has decided to stay distant from the relationship, only because they don’t relate to you anymore. There may be myriad reasons why they are thinking, feeling and acting the way they are. But that’s the truth. And the faster you accept this new reality, the lesser you will suffer, the faster you will heal. 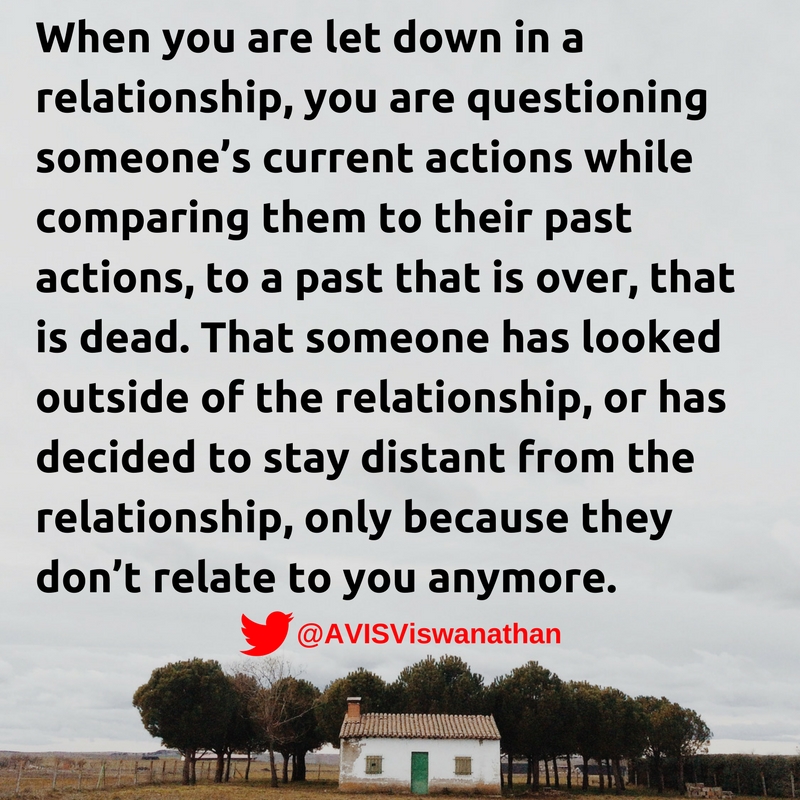 But the human mind will magnify and complicate this simple, straight-forward “no relating = relationship is dead” situation. For instance, if it is an issue between spouses, the mind will bring in the context of marriage, society, children and family. Marriage is an institution – make it work. What about the kids – make it work for at least their sake! You cannot act against a prevalent social norm, so adjust, accommodate. But if you consider the fact that the marriage was long dead even when either or both partners stopped relating to each other, you will see the pointlessness of suffering something or someone for the sake of others! In my case, it is an issue where my mother doesn’t trust me. Of course, my mind magnified things and tried to point out that I have to appreciate and understand that it is my mother, who, biologically, is responsible for my very existence on the planet. When I couldn’t bear my suffering anymore, I employed the “we don’t relate to each other anymore” logic and decided to stay away. I am sure it has helped her as much as it has helped me. We inhabit different orbits, but are peaceful in our own spaces.

Although I am in favor of forgiving – even if you can’t forget what happened – and moving on, I don’t champion that necessarily. I believe people will learn to forgive on their own. And they will do that only when they realize the value in forgiving – that it liberates you from the burden of anger, grief, guilt and poor self-worth. So, all I will say is that the thumb-rule for all decision-making in Life must be to ask yourself what makes you happy.  In a let down, when you ask this of yourself, you will realize that only letting go can help you end your suffering, heal and be happy.