Refusing to look at a problem, or denying its existence, cannot make your Life any simpler.
All what you suffer from comes from what you deny. Facing Life and taking a problem head on is what can make you solve it and live in peace.
But we invariably don’t like to exorcise our demons. We somehow have become comfortable suffering, feeling tormented, preferring to stay debilitated than feeling liberated. Because continuing to be miserable seems far more easier than having to work hard to rid ourselves of what makes us miserable!
I met someone yesterday after a couple of years. He, in his own opinion, was financially ‘very well off’. Yet he found his Life ‘incomplete’. He spent entire days, daily, in a prominent five-star hotel’s bar, literally being there from the time it opened to when it closed! He lamented to me that his wife no longer loved him and all she wanted was ‘his credit card and a certain sum of cash monthly for her shopping sprees’. His 24-year-old son, though married, was not exactly doing anything significant and ‘lived off’ his dad. His daughter was the only one who understood him but their relationship too in recent years had come under stress. She wanted to go overseas for higher studies but he was insistent that she marry now because that was the norm in his ‘community’. He said to me, in a tone reflective of a defeated man, “I have lost it in Life. I have done no wrong. Yet everyone around me has let me down. I am suffering. I wish I could die.”
I laughed at him and looked him in the eye. And said: “My friend, you are the problem. For as far as I know you, you have been drinking entire days for years now. You have a drinking problem – spurred by a lack of purpose in your Life. There’s enough and more money. So, because you don’t know how to be useful and productive, you are indulging in something that has already ruined your family Life and is on the verge of consuming you.”
My friend suddenly turned hostile. He ended our meeting and drove away drunk in his car, despite my request and protests to engage a taxi leaving his car behind.
I wish he understood that unless he faced the brutal reality of his Life, he may really be unable to make it any better.
Just as my friend has a problem, each of us has. All of us like to deny whatever is our problem__ranging from a relationship to a lousy job to a ruinous habit__hoping that time will take care of it! This is one area where no one can help you than you, yourself!

But facing the truth is scary. How does one see the reality?
Good question. And so, it is with all situations, with all of humanity, with all aspects of Life! Fundamentally, if you know what you want out of your Life, you can go find that Life and recreate, reinvent yourself. But if you don’t know what you want, how can anyone help you? This question is not as profound as many people make it out to be. It is a dumb question. Even a person with low IQ can answer it __ by approaching it the other way, by knowing, for starters, what you don’t want in your Life! Because the answer is that nobody, definitely not you, wants to suffer. Since you don’t want to suffer or be miserable why do anything, or accept any situation that accentuates your suffering? 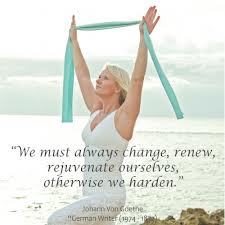 The only way to solve a problem is to accept it exists. And to look it in the face and lead the change yourself. There are no two ways in which you can change your current realities or end your suffering!
So, if you are feeling miserable about anything__or anyone__in Life, sit down and introspect. Diligently make a list of actions that you must take to end your misery. Resolve to do it. And just get down to doing it. Don’t give yourself the license to make excuses. Resolving to do it from the New Year is an excuse straightaway! So, don’t kid yourself!

Remember what Andy Law, maverick creative thinker and head of The Law Firm, says, “Unless you are prepared to give up something valuable you will never be able to truly change at all, because you’ll be forever in the control of things you can’t give up.”