Skip to content
Never say or do anything in Life that cannot be taken back or undone. And you can take back and undo nothing!
This really means we must employ discretion at all times and never let anything be said or do anything that we will regret later. Scathing opinions are easy to roll off our tongues. Or, often times, we react in rage and anger, making choices and decisions that change things between us and other people – forever. 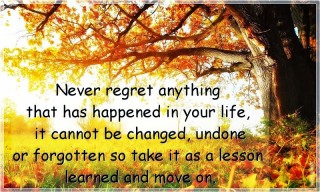 Some years ago, I used to be very trigger-happy. I had to say things as they occurred to me. And in one relationship, at least, I was keen that some decorum was maintained between me and the other person. So, I would hold a mirror. I would say the truth as it was. But this only made the relationship worse. The other person never understood anything – and never certainly understood me. So, here I was, to this person, for several years on the trot, irreverent, loud-mouthed, unfit and loathsome. It hurt me a lot that I was seen that way. So I resisted even more aggressively. Then, one day, in May 2009, we had a big, big, showdown. It was so intense, I would wake up with a nightmare thinking about it for weeks after that incident. It struck me, as I introspected deeply, that I had caused the distance between us to grow because of my insistence that the relationship be mended. I decided to give up that desire. And I withdrew into a shell. I have stayed there for a long, long time. Now, in the past few days, this person wants to revisit the relationship. The scars are there – very visible and so they remain unforgettable. I can’t forget what has been said about me or my family, I can’t ever forget how we have been treated at a very personal, human level. It’s true that I have evolved, so I have forgiven this person and I have moved on. But because the scars remain, and the wounds have been deep, I have given up hope that things can ever be improved between us. The fact that, once said and done, nothing can ever be undone in Life – especially in emotional, relationship contexts, only helps me continue to value my inner peace and forces me to stay where I am, in my shell!
When people anger us, they cause us to react in a similar manner. In our anger we say or do many things. These are further interpreted – they are never really understood – by those causing the situation in the first place. Then more anger gets expressed. More opinions are made and more negative energy is hurled at each other. Over time, a Great Wall, is built. And people begin to live on either side choosing to often wish the worst for those on the other side. Then, through a natural process of growth and evolution two realizations dawn: 1. That clinging on anger and hatred is futile. 2. That this is a big world and we are all small people. That our smallness is even more starkly evident with our “petty” disputes with people. But it is too late. Because a lot has been said and done, and because it can’t be undone, Life has to go on with the Great Wall growing longer, and often higher, with the passage of time.
I have learnt from Life that it’s always best to pause, to ask, in any potentially emotional and explosive situation, if what we are about to say or do is likely to do good to all concerned, if what we have to say is the truth and what we really believe in, if what we are choosing is what we always wanted. This kind of reasoning does not always help you get instantaneous clarity on issues but helps you with enough so that you can postpone making a choice or expressing an opinion immediately. Always a more reflective, informed stance on Life-situations, even if takes longer, benefits everyone concerned. At the core of our lives is the way people express and experience each other. Maybe, just maybe, if some thought can be exercised before saying or doing something, then there will be no need to seek to undo anything!?
Follow The AVIS Viswanathan Blog on WordPress.com
Follow @AVISViswanathan