Skip to content
In this illusory experience called this lifetime, take nothing seriously – including yourself!
I caught up with my cousin after a long, long time. We talked about Life, philosophy and spirituality for a couple of hours. In the course of the conversation, my cousin remarked that Adi Shankara (788 ~ 820 CE) was the greatest philosophers of all time – greater perhaps than Socrates, Plato and Aristotle. My cousin extolled the virtues of the Vivekachudamani, the epic poem that Adi Shankara wrote in 580 verses, to expound his Advaita Vedanta philosophy. I found the conversation with my cousin empowering and enriching. Even so, I came away with a sense of disagreement over anyone wanting to merely pride Indian intellect as being ahead of and above the rest of the world.
Why can’t we enjoy anything – philosophy, experiences, whatever – in Life without comparing, I thought to myself. In fact, a story that Osho often narrated from Adi Shankara’s Life, highlights the same perspective.
Adi Shankara was in Benares. One day, early in the morning – it was still dark because traditionally the Hindu monks take a bath before sunrise – he took a bath. And as he was coming up the steps, a man touched him on purpose, not accidentally, but on purpose, and told him, “Please forgive me. I am a sudra, I am untouchable. I am sorry, but you will have to take another bath to clean yourself.”
Shankara was very angry. He said, “It was not accidental, the way you did that; you did it on purpose. You should be punished in hell.”
The man said, “When all is illusory, it seems only hell remains real.”
Shankara was taken aback.
The man said, “Before you go for your bath again, you have to answer my few questions. If you don’t answer me, each time you come up after your bath, I will touch you.”
It was lonely and nobody else was there, so Shankara said, “You seem to be a very strange person. What are your questions?”
He said, “My first question is: Is my body illusory? Is your body illusory? And if two illusions touch each other, what is the problem? Why are you going to take another bath? You are not practicing what you are preaching. How, in an illusory world, can there be a distinction between the untouchable and the brahmin? – the impure and the pure? – when both are illusory, when both are made of the same stuff as dreams are made of? What is the fuss?”
Shankara, who had been conquering great philosophers up until then with his intellect, could not answer this simple man because any answer was going to be against his own philosophy. If he says they are illusory, then there is no point in being angry about it. If he says they are real, then at least he accepts the reality of bodies…but then there is a problem. If human bodies are real, then animal bodies, the bodies of the trees, the bodies of the planets, the stars…then everything is real.
And the man said, “I know you cannot answer this – it will finish your whole philosophy. I’ll ask you another question: I am a sudra, untouchable, impure, but where is my impurity – in my body or in my soul? I have heard you declaring that the soul is absolutely and forever pure, and there is no way to make it impure; so how can there be a distinction between souls? Both are pure, absolutely pure, and there are no degrees of impurity – that somebody is more pure and somebody is less pure. So perhaps it is my soul that has made you impure and you have to take another bath?”
Now, the second question was even more difficult. Shankara had never been in such trouble – actual, practical, in a way, scientific trouble! Rather than arguing about words, the sudra had created a situation in which the great Adi Shankara was check-mated. He gracefully accepted his defeat. And the sudra said, “Then don’t go take another bath. Anyway there is no river, no me, no you; all is a dream. Just go into the temple – that too is a dream – and pray to God. He too is a dream, because he is a projection of a mind which is illusory, and an illusory mind cannot project anything real!” 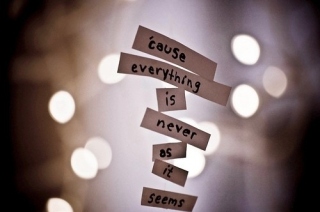 I find this story beautiful. Unputdownable in fact. I believe the big learning here is this – enjoy everything that you see or experience for it’s own sake. Don’t try to dramatize and intellectualize anything. Least of all Life. My cousin has phenomenal insights into Advaita Vedanta no doubt, but he lost me while making the avoidable comparison.
I don’t think it ever is about who is bigger or who is better or who is richer or who is more beautiful. Everything is what it is. Everyone is who they are. And nothing is permanent. Everything and everyone is transient. So, don’t get caught up in a competition that is meaningless, in running a race which is a non-starter or in ritualizing and intellectualizing Life. Just live – as long as your Life lasts!
Follow The AVIS Viswanathan Blog on WordPress.com
Follow @AVISViswanathan