Citizenship can be ordered about, but nation-ness comes from within!

On Tuesday evening, after a Talk I delivered at a Rotary Club, we sang the National Anthem at the end of the meeting. I get goosebumps every time I sing or hear Jana Gana Mana. That’s me. And I felt those goosebumps again that evening.

As far as I know, in half a century of being Indian, every Indian gets those goosebumps. And every Indian relates to our Anthem in their own special, private, unique way. Therefore, I find the drama over the recent order by the Supreme Court avoidable – it makes playing of the National Anthem in movie halls mandatory, and by inference, insists that people respect the song by standing up while it plays its 52-second length. I feel if people were not told that they have to respect the Anthem by standing up, had the Court order been understood as just to be playing the Anthem mandatorily, there would have not been an issue. Sadly now, the whole idea behind the playing of the Anthem in movie halls is not being understood, it is being interpreted and resisted!

As a case in point, I found a young friend’s recent comment on Facebook very disturbing. She said she did not stand up to the Anthem in a movie hall and instead preferred being called a ‘traitor’ by some members of the audience. I am sure she didn’t mean that she is a ‘traitor’; I am also sure she is not okay being jeered at and taunted by jingoists. What we must recognize here is that her choosing not to stand up for the National Anthem is symbolism; basically, what is unstated and what she – and several million other Indians – are trying to communicate is that “the state cannot dictate how I must feel for my country”. And I completely agree with that sentiment. To my knowledge, movie halls in Maharashtra have been playing the National Anthem for the longest time – and without any fuss. I have watched movies there and I have sung the Anthem with joy and fervor – and have had my goosebumps! Clearly, not standing up to the National Anthem, when it is played, is not being anti-national. 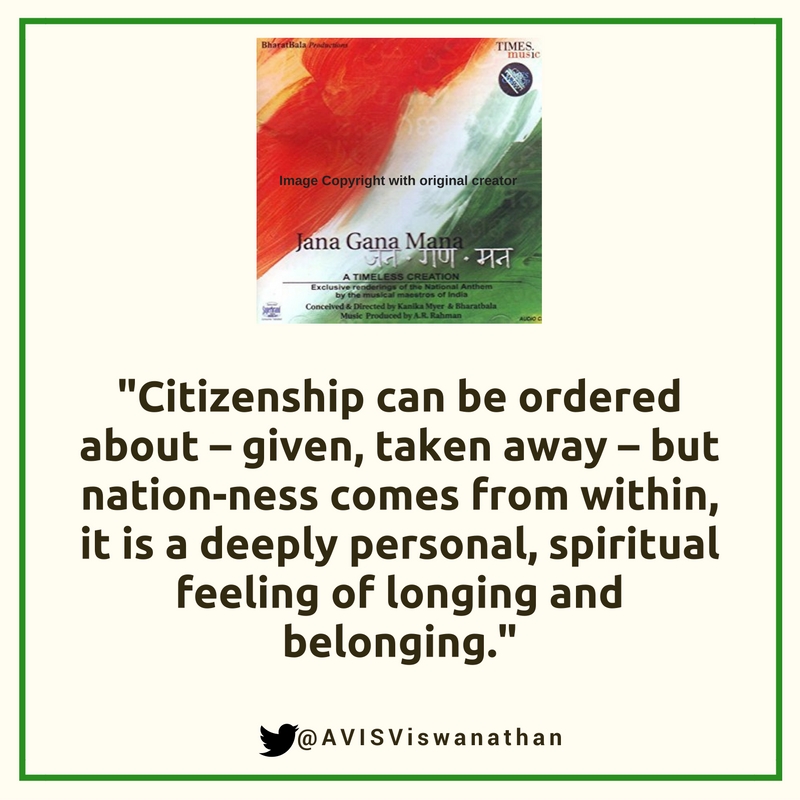 In fact, I want to go back in time to Republic Day, 2000. A.R.Rahman and Bharatbala launched the Jana Gana Mana video album that day. The President of India K.R.Narayanan released it in the Central Hall of Parliament. The album featured 35 leading Indian artists – vocalists and instrumentalists – coming together to create an unputdownable, timeless work of art. The video, which had the Anthem in subtitles in 16 Indian languages, did not stipulate that standing up as a mark of respect to the National Anthem was mandatory. In fact, it would not be very comfortable to stand for the entire duration of the video; the physical strain would certainly take away from soaking in the beauty of the song’s rendering! It is best enjoyed in private, in solitude, when reflecting. I have often had a glass of whisky by my side as I have let Gurudev Rabindranath Tagore’s lyrics of the Anthem, Rahman’s music and the rendering by various music maestros, take me on a pilgrimage of being Indian. And almost always, goosebumps apart, I have been moved to tears. For me, on the rocks, both whisky and the National Anthem, are awesome! I treasure that album because it helps me not just revisit but also celebrate my Indian-ness. It is a strong reminder that citizenship can be ordered about – given, taken away – but nation-ness comes from within, it is a deeply personal, spiritual feeling of longing and belonging.

However, the response to the queer Supreme Court order must not be what it is today. Okay, question the logic if you like. But don’t protest it, don’t resist it. Anything that you resist will cause your suffering. Instead surrender yourself to the joy of your Indian-ness by celebrating the Anthem. It appeals differently to each of us. You can never package patriotism, your Indian-ness, in a framework and generalize it – which is what the interpretation of the Supreme Court ruling is ending up doing. So, let’s go past that order’s letter and recognize the spirit in each Indian, which is a right to feel Indian in their own special way. It is a birthright, a jamnasiddha adhikar, not merely a Constitutional one. So, celebrate your Indian-ness by embracing the Anthem, by living it and by respecting it.

What is most admirable about India is how the National Anthem, without any formal, enforced education, is known to so many, many, Indians. This is a country where so many rules exist. And almost all those rules are flouted by the aam Indian – from not wearing helmets while riding two-wheelers to drinking and driving to littering in public spaces to paying petty bribes….the list is endless. Yet, nowhere is it mandated that you must sing the National Anthem to prove your Indian-ness – for instance, it is not a pre-requisite for issuing you a Passport or Aadhaar card; but still, so many million Indians know and sing the Anthem. And almost everyone, always, stands up in respect in public spaces – without any direction or reminder. This is the Indian-ness that we must preserve and nurture. In fighting a Court’s ruling, don’t let your inner Indian-ness, your peace, be vitiated.