A couple came to us wondering how they can separate while ensuring that their children are not affected. I shared how my friend and his wife worked out a win-win arrangement, based on my advice, that has helped them both immensely. On this Podcast, I talk about how it is possible for a couple to set aside their differences if they choose to keep their children at the centre of their Universe. Any fight that is ego-driven is not worth it. Focus instead on a “working arrangement” when the relating between two people goes out the window. 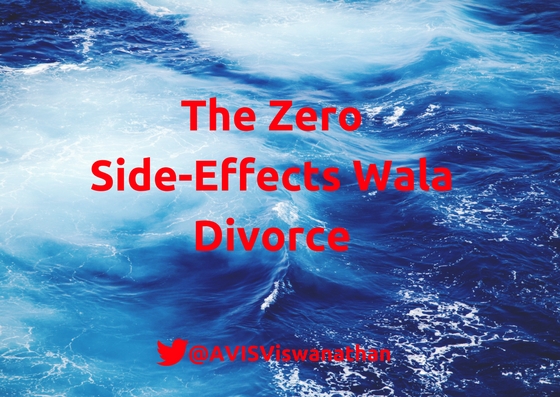 Separate as a couple if you must, but stay together as parents.

I saw an interesting – and valid – observation made by Justice Kurian Joseph of the Supreme Court in today’s Hindu. He advises estranged couples to put their children first, ahead of even themselves, while working out divorce settlements. This way, he believes, the parents may be able to agree on all their differences and set up a workable, practical, compassionate, parental relationship with their children. I agree with this point of view completely.

Some years ago, this is what I advised a dear friend too. He has a drinking problem which had led him to being out of work. He was often fighting with his wife because she, naturally, hated him being drunk most of the time. One day the poor lady gave my friend an ultimatum that if he wanted to live with her, he must give up his habit. That very evening this friend invited me to a bar for a drink. Two pegs down, he said he was going to divorce his wife for “ruining his peace” and for “giving him an ultimatum”. I asked him if he had thought of his teenage daughter. And he replied he would fight for her custody in court. That’s when I held him a mirror and told him that if he loved his daughter, he must learn to respect his wife’s point of view too. Especially when she had a valid point. I dropped him home that night. To his credit, my friend sat down with his wife and worked out an arrangement where they started to live separately in the same apartment – but with no rancor between them, sharing parental responsibilities, splitting the bills and the chores between them. Their daughter has gone on to college now and the couple look forward to being more independent with their individual choices and outlooks in the years ahead.

I think this couple have implemented a very fair and workable arrangement. And this can be made to work in most cases if a couple can understand that a.) it is perfectly fine to fall out of love, just as they had once fallen in love (irrespective of whether it was before or after marriage!); or b.) it is okay to realize and concede that there was never any love lost between each other at all! The simplest way to clear up all the confusion over a soured or souring relationship is to ask yourself – would I want to (continue to) live with this person if there was so social stigma attached, if there were no financial claims involved and if there were no parental responsibilities towards the children? If you answer yes, then you are no longer relating to your partner in the relationship. Which means, the relationship is dead and you must separate. Now, when the decision to separate is made, think of the children and make them your first priority. Don’t think of social stigma or financial claims, they are surely less relevant that the children. And the way to look at your roles as parents is to be able to give your children the best of both parents and an environment of love and care. This can happen only when the parents are not fighting. So, stop fighting! Period.

Understandably the point when a couple come to separate is fraught with myriad differences. Of opinions, of attitudes, of claims and of just the way they are experiencing each other. It is also possible that while one partner may be willing to see the larger picture – involving the welfare of the children – the other may not. This is where a spiritual perspective comes in handy. If you consider the futility of any fight that saps all your energy and fills you with anger and negativity, you will want to clearly abandon it. A good fight, if at all, is when you don’t suffer while going through the process of fighting. There is a lot of endurance which is tested but you believe in the cause you are fighting for. Often most fights stop being worth it because they are not cause-led, they are ego-driven. Which is why they turn bitter. And divorce proceedings are no exception. However, when you bring in this understanding that you will first work for your children to get a compassionate environment, that allows both parental influences to thrive, you will see value in dropping all differences and moving on! Bottomline: it is totally unnecessary that divorcing couples fight with each other at the cost of their children. This is the way to go through a divorce without side-effects!