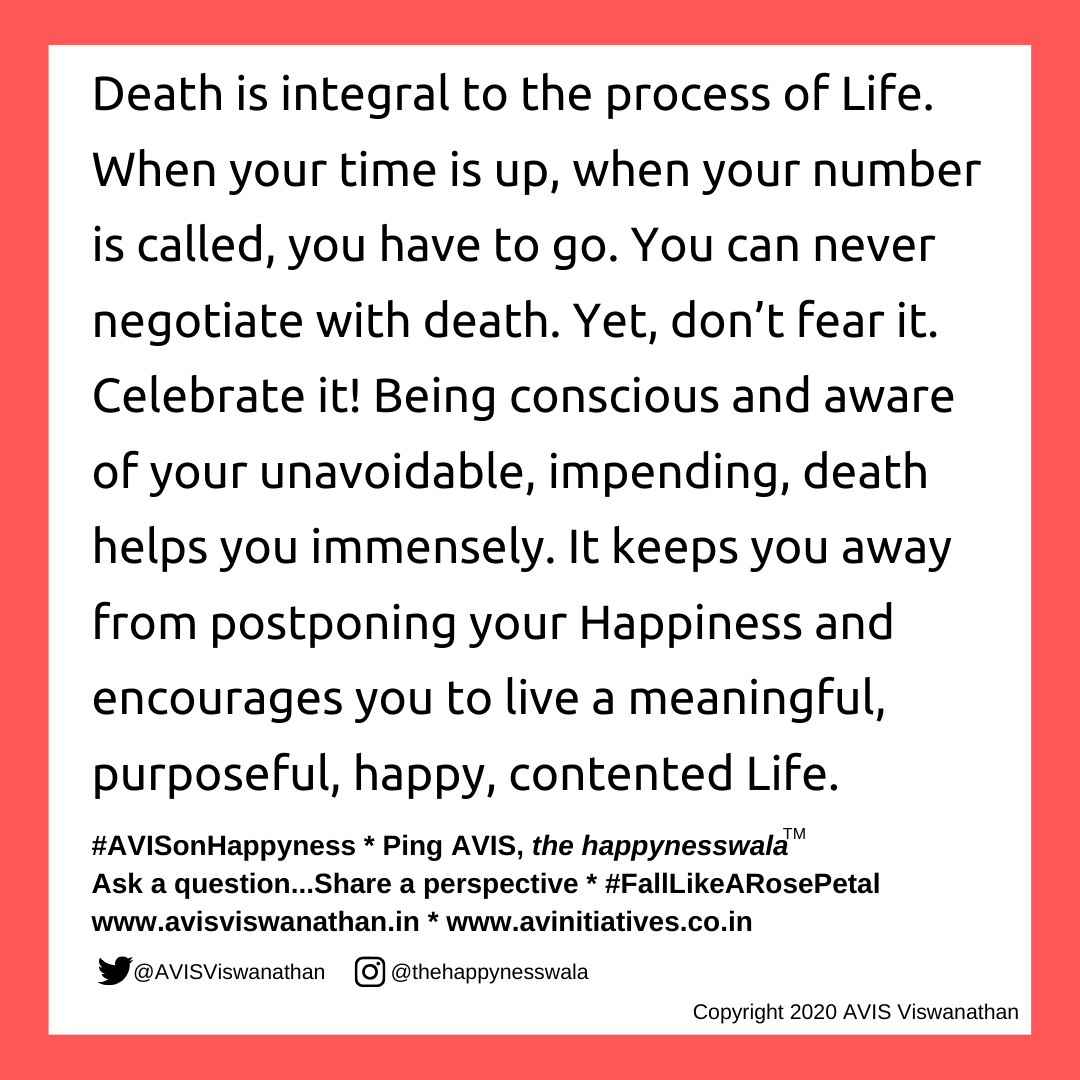 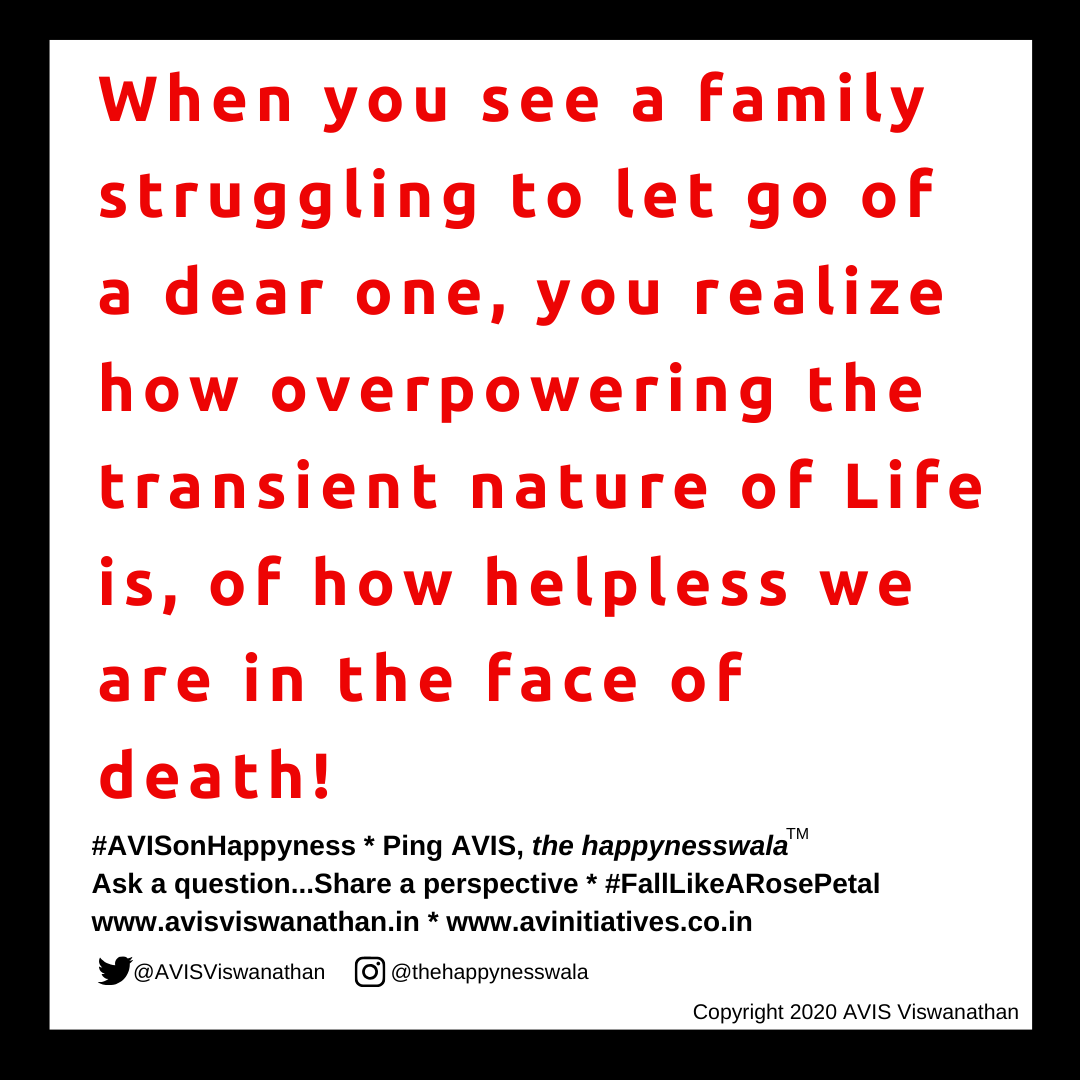 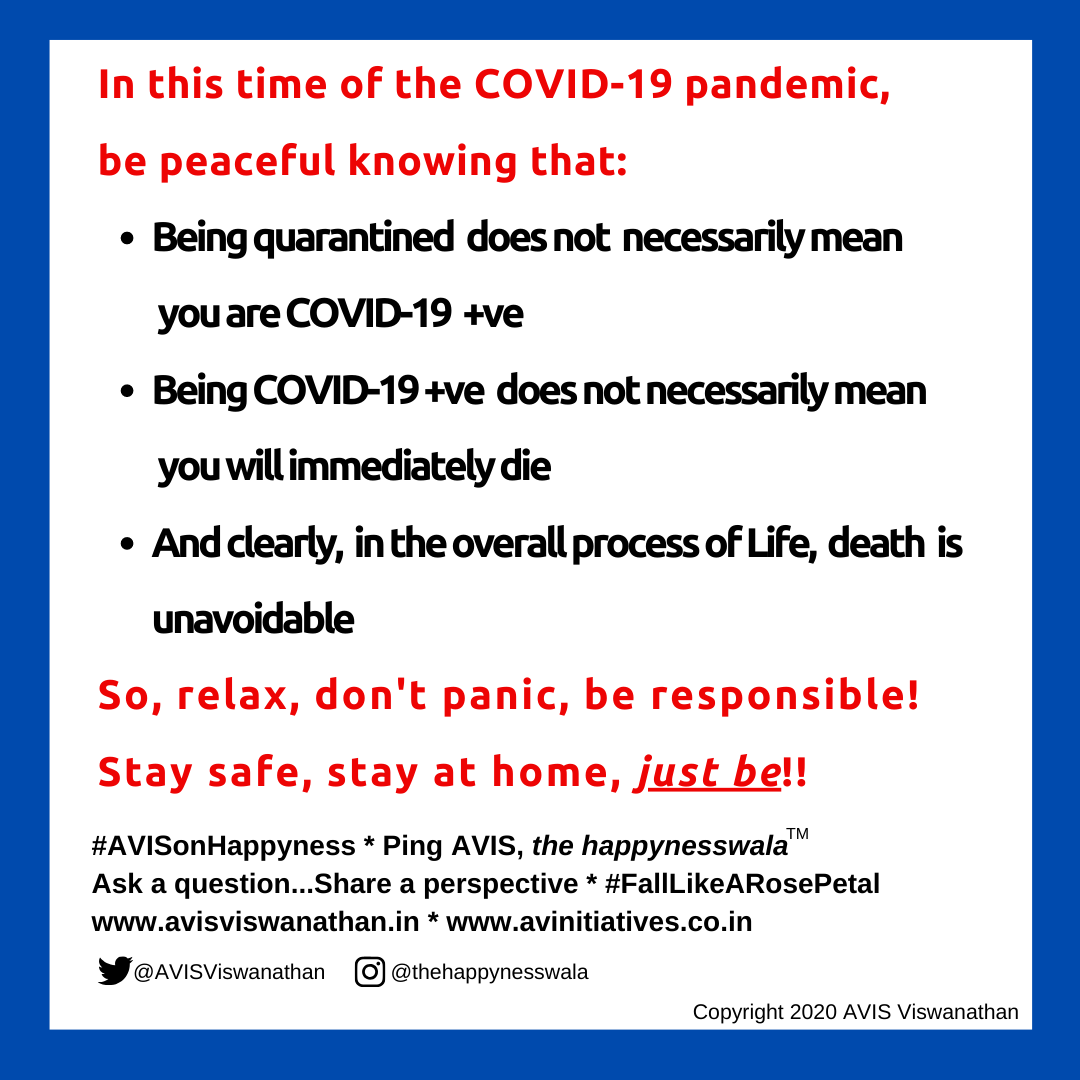 “It is a blessing to go away doing what you love doing!”

That’s what Vaani (the other happynesswala, my soulmate) had to say.  She was celebrating young Srikrishna Sivakumar’s Life and memory this morning.

The only way I can remember Krishna is as a #BlissCatcher – he simply followed his Bliss – filmmaking; he immersed himself in doing only what he loved doing, and he was absolutely unwavering and uncompromising, and deliriously happy, when he was doing it!

Vaani and I, like the rest of the world, woke up this morning to the horrifying news of the accident on the sets of Indian 2 (that happened late last evening) that claimed three lives. Among those who died, we soon shockingly discovered, was our dear #BlissCatcher, Krishna!

Krishna connected with me first in October 2016. He was making an ad film for a smart wallet on a really shoestring budget; he wanted me to play a ‘grumpy dad’ in the film. A mutual friend had referred me to him because she knew that it was on my bucket list to act in a film in my Life! Although I was a rookie, and this was to be my first film, Krishna dealt with me professionally and with a lot of dignity. He actually sent me the script over email and wanted me to decide if I was comfortable with the role. When it came to the fee, Krishna was forthright: he gave me an option to say no because he had no “serious budget” to offer me “a reasonable professional fee”. I liked his sense of integrity and his empathetic approach, that too, to a rank newcomer. I signed up!

I believe I am blessed I got an opportunity to work with Krishna. That too on my first film, even if it was only for a 73-second online commercial! His soulmate Amitha produced the film for their Red Canvas Productions. We shot for a full day. And I saw what a deep, intense, committed professional Krishna was. His sense of diligence and discipline and his quest for perfection amazed me. I was the oldest person on the set and Krishna, having perhaps heard that I am quiet a stickler for time, went out of the way to make sure I that I was never kept waiting for my shots. I tried reasoning with him that I was only a debutant and I kept telling him that I was very willing to be led, but he always ended each of his directions with a standard, “Is that okay, Sir? Are you comfortable, Sir?” I must confess that he made a huge difference to making me feel comfortable on my first shoot. I started the day having that nervous sense deep within me, I was not sure I could emote in front of a camera, I was not even sure if I was made for this medium…but Krishna put me at great ease. There was a rare empathy in him, even as he drove a bunch of us, his actors, to give him what he was looking for. Besides, Krishna and Amitha complemented each other beautifully, making the entire process of shooting that day a warm, memorable, experience for me.

Some months later, Vaani and I discovered that although Krishna had tried being “chamathu” and had gone to engineering school, every day of the four years there had acutely reminded him that “engineering was not happening for him”. He was very clear: to him, Happiness = making films!  Over coffee with him and Amitha at Starbucks one afternoon in late 2017, we explored Krishna’s journey for our popular Conversation Series, #BlissCatchers. We learnt that, after engineering school, Krishna seized a serendipitous opportunity to be on the legendary Kamal Haasan’s team as an apprentice assistant director. Those one-and-a-half years with the man changed Krishna’s Life! Krishna always believed that he was a forever student of a “University called Kamal Haasan” and that he  would always be a “nobody” in the field of cinema! That explains why he was very grounded and humble to a fault. Yet he had this seeking spirit and was totally uncompromising and unwavering in his love for his art. After working as an assistant on a few feature films (including Vishwaroopam I & II), he and Amitha set up Red Canvas Productions making ad and corporate films. I still remember him telling us this: “Life isn’t easy but it is fun…so much fun that I have never thought of going back to being an engineer, not even once!” And on the #BlissCatchers Conversation in June 2018, he told me: “I enjoy the process of filmmaking. It is not about whether it is a feature film or any other film, it is the process of making films that I love.” 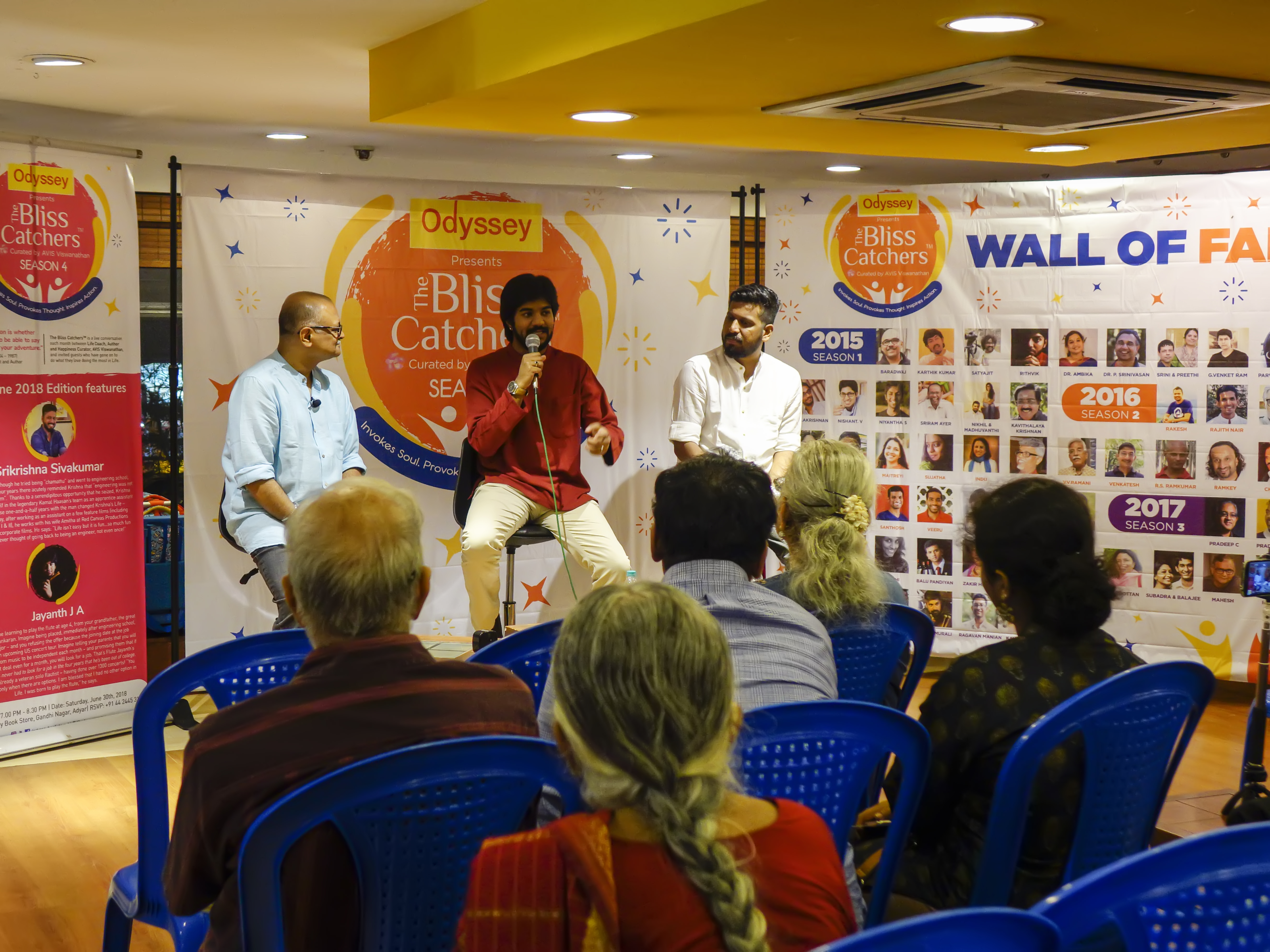 My last interaction with Krishna was on WhatsApp in August 2019. We were bringing up the 50th Edition of #BlissCatchers that month and I had pinged him to invite him and Amitha for the event. Krishna said he was shooting overseas. I asked him if it was his own feature film that he was directing. He replied saying that he was only an assistant director on that film. I told him that Vaani and I looked forward to the day when he would make his own independent film and that “we would do whistle-podu” for a first-day-first-show for that film! He thanked me profusely and said he was grateful for our love and for our faith in his abilities.

The “suchness” of Life is that Krishna never got to make that independent feature film.

Even so, his Life and memory calls for celebration. Simply because, he had the courage to follow his Bliss. He lived a short, meaningful, happy Life, doing only what he loved doing. And, as Vaani pointed out this morning, he went away following his Bliss, as a student of the University that he truly believed he belonged to, and with Kamal Hassan on the sets when he passed on!

Krishna’s short Life, as you will further glean from the #BlissCatchers Conversation I had with him, reminds us that we must never postpone our Happiness. We must not feed our insecurities, our fears, our worries. Instead, invest your time, attention, energy and resources only in your Happiness, in what makes you truly come alive. Remember, this is the only Life you have! 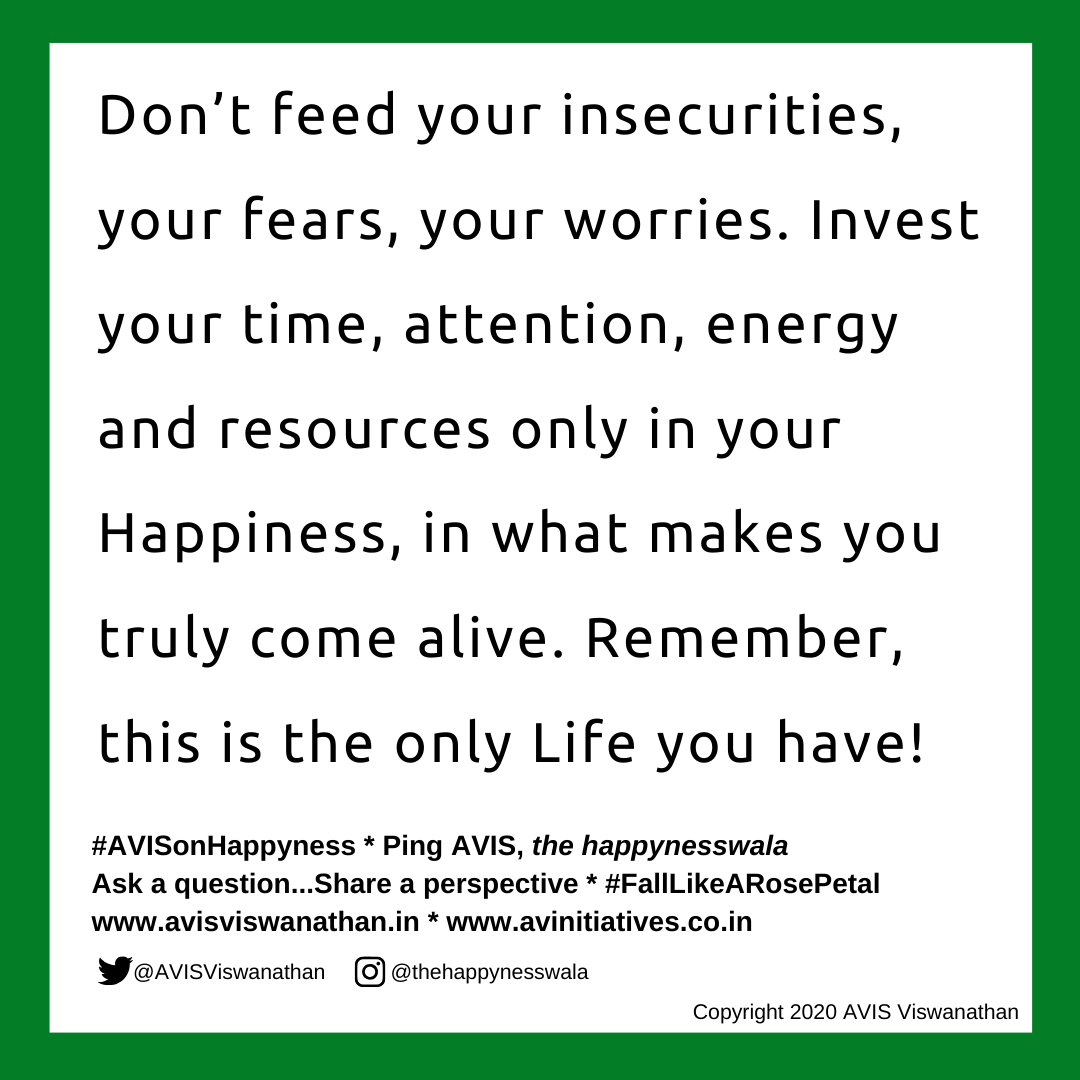 (Vaani and I send our prayers to Amitha and the family, and to the families of the others who lost their lives in the Indian 2 accident.)

Note: AVIS and Vaani are the happynesswalas. They believe their Life’s Purpose is Inspiring ‘Happyness’! They are going through a fascinating, Life-changing experience – a crippling bankruptcy!!! Look them up here: www.avisviswanathan.in and www.avinitiatives.co.in. 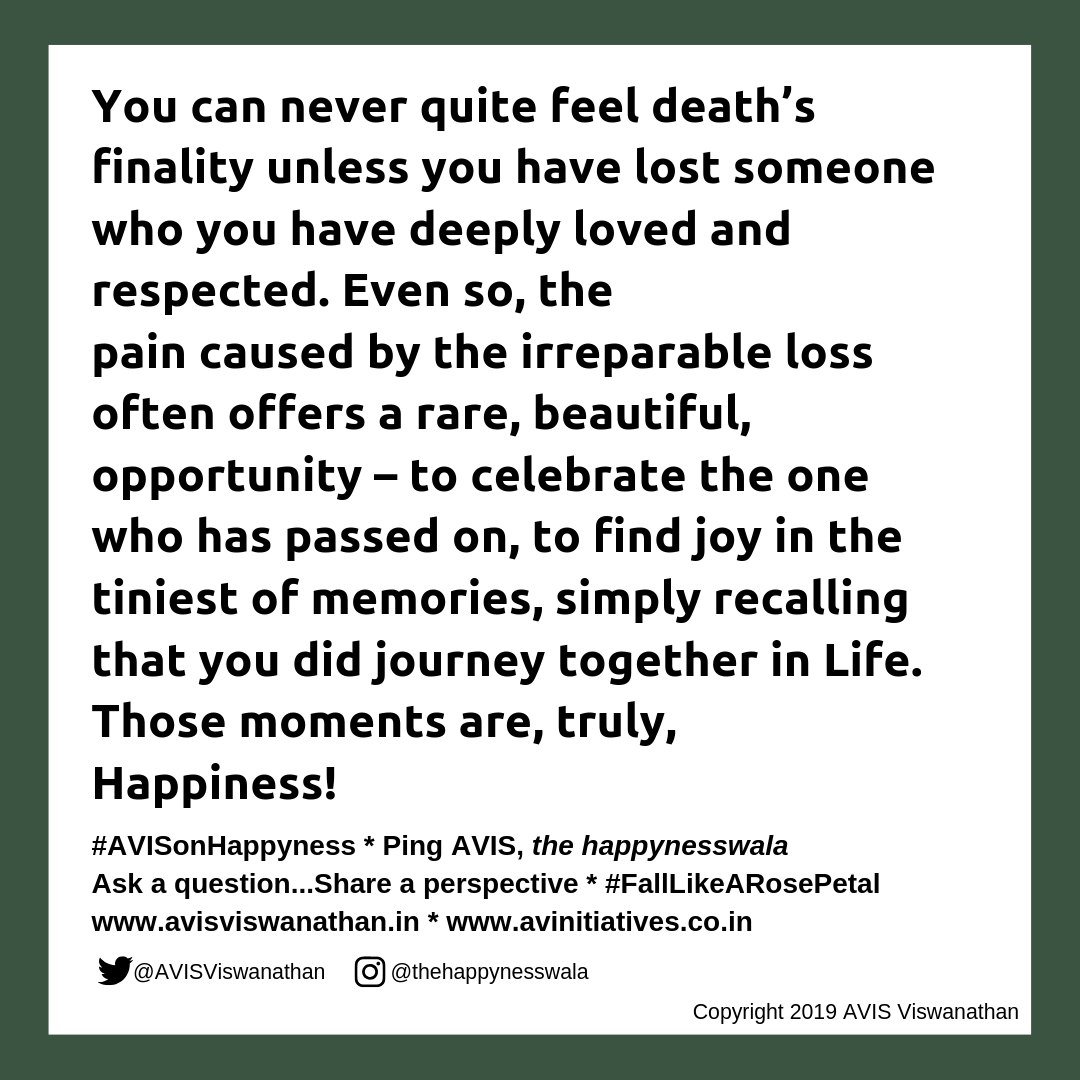