Skip to content
Whatever happens, know that Life will go on. And you too must flow with it, ‘letting your music play’!
There are times in Life when you wish you could do something about what you are faced with. But you will be unable to. So, instead of hating what you have been served, just start loving it and live in the moment.
I watched ‘Titanic’, James Cameroon’s classic movie, one more time during the weekend. And learned one more time from the amazing musicians on how to ‘let the music play’ till the very end.

Wikipedia says: “After the Titanichit an iceberg and began to sink, Wallace Hartley, the bandmaster and violinist, and his fellow band members started playing music to help keep the passengers calm as the crew loaded the lifeboats. Many of the survivors said that he and the band continued to play until the very end. None of the band members survived the sinking and the story of them playing to the end became a popular legend. One survivor who clambered aboard ‘Collapsible A’ claimed to have seen Hartley and his band standing just behind the first funnel, by the Grand Staircase. He went on to say that he saw three of them washed off while the other five held on to the railing on top the Grand Staircase’s deckhouse, only to be dragged down with the bow, just before Hartley exclaimed, “Gentlemen, I bid you farewell!” A newspaper at the time reported “the part played by the orchestra on board the Titanic in her last dreadful moments will rank among the noblest in the annals of heroism at sea.””
I wouldn’t say it is heroism. It is simply intelligent living. Because you can only control what’s within your control. All your worries and anxieties, fears and insecurities, come from what you can’t control. Now, instead of worrying, fearing and suffering, if you can just look at the situation and say, “Well, well, well….if this is what it is, let me see how I can find peace within this situation.” This really is the only way to live a Life which we didn’t ask for and whose game-plan we have no idea of either!
Let us remember that there is the opportunity, always available to us, to change our most dreadful moments into ones full of grace! All we need to do is to be open to the opportunity. When we are grieving, mourning, sorrowful, we are closed. We are not open to the Universe’s energy __ its compassion, its warmth, its grace. As Ramakrishna Paramahamsa has said, “The winds of grace are always blowing. You must open and hoist your sails to catch it.”
So, unfurl and open your sails, open up your soul. If you are in a difficult time, accept it. Don’t resist it. This may not take the pain away. But it will help you immensely by ridding you of all your suffering! This then is the only way to ‘let your music play’….
To avoid feeling miserable about your Life, stop making assumptions about it. It is almost often the fear of how your Life will end up that cripples you and brings you suffering. 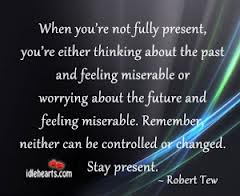 Think about it. We have been created to be able, yet we often become miserable. We fret and fume over our situations, our environments, our relationships, our jobs, our governments and so many, many other things! One of the reasons why we invite misery upon ourselves is we imagine a lot of scenarios that don’t exist. What we assume to be a worst case scenario never really happens. Yet we constantly fear it will and that fear debilitates us.
The other reason we are miserable is that we are all attached, particularly, with anything to do with money. Money is important, no doubt. It is fine as far as you are in possession of money. But if money has started possessing you, well, you certainly have a problem. The greatest wealth you can have is this Life. Intelligent living is the ability to employ discretion and to use money, to the extent one needs it, than be consumed by trying to protect it. Again, the truth is that everything that you__and I__need is provided for. Our needs never bring us agony. Our wants do. So, simply being happy, despite your circumstances, can make your misery vanish.
That is not to say that you will not face problems. You will. Such is the nature of Life. But when you understand that imagining something that has not happened yet, fearing it all the time, is what causes you misery, and you realize that money is impermanent, your ability to deal with the problems you are faced with improves substantially!
So, be present when Life is happening to you. Don’t cling on to anything. Don’t imagine stuff that hasn’t happened yet! Your misery will make way for peace and bliss!
Follow The AVIS Viswanathan Blog on WordPress.com