Her Life – and death – would not be in vain if we choose not to get personal over issues or differences that separate us from people.

On Tuesday night, when news of Gauri Lankesh’s assassination broke on my NDTV App on my phone, I exclaimed, “Oh! My…God! Oh! My…God!” Vaani, who was on the couch, beside me in our living room, looked at me quizzically. I showed her the notification. And she too stared at it in complete disbelief. Slowly, painfully, we began to make sense of what had happened to Gauri, our good friend and my former colleague.

Gauri and I worked together at the Ananda Bazaar Patrika (ABP) Group in Bangalore in 1994 – she was with Sunday magazine and I was with Businessworld. She was a fine journalist. We lost touch with each other when I quit the media and moved to Chennai from Bangalore in 1996. I sent her an Invite for my Book Fall Like A Rose Petal’s launch in Bangalore in Aug 2014. In this time that I lost touch with her, she appears to have evolved into a great editor and campaigner for a secular, inclusive society. She has lived a Life of Purpose. 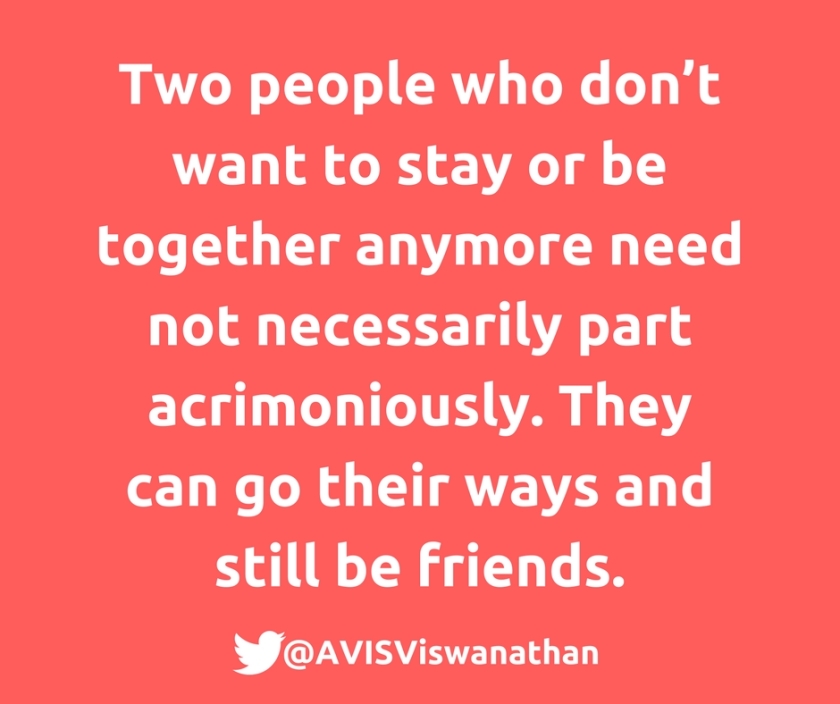 Recalling Gauri, I told Vaani that she was competitive as a journalist. But she was always mindful of her friendship with people first. I have never met or known Chidanand (Chidu) Rajghatta, who is Gauri’s ex-husband. But I had known through Gauri, when we worked together, that she was still friends with him. When she first told me about it, I found it “strange”. I had wondered: “How can two estranged, divorced people, continue to remain friends?” Looking back, I realize I was so immature and my perspective was so shallow. I told Vaani on Tuesday night, “If I have known Gauri (and through her, Chidu) well, Chidu will write a piece on his friendship with her.” I missed that piece in yesterday’s papers. Having been a journalist, I knew the only reason it perhaps did not appear yesterday was because of the newsbreak happening late in the evening on Tuesday.

I expected Chidu’s piece today. And there it was: ‘My friend and first love, Gauri Lankesh was an epitome of amazing grace’.

It’s a beautiful tribute from a man to the lady who he loved, who he perhaps still loves, but, importantly, who he respects immensely. Chidu talks about how he and Gauri nurtured a wonderful understanding between them. Which was to never be hurtful to others – and to each other. This, says, Chidu was why they had remained great friends. This tied in completely with what Gauri had told me one lazy, news-less, story-less afternoon in the ABP office on Madras Bank Road in Bangalore. I am sure many who knew Gauri had seen this compassionate, graceful, side of her more closely than me.

A lot will be written about the cause of secularism and inclusiveness that Gauri lived – and died – for. But the key lesson I pick up from her Life is that even if you must differ with someone, choose to focus on the issue that separates you both than on the person. Her friendship with Chidu, which continued till her end came, for years after they had divorced, is a case in point. I must confess that I now know how wrong I was back then to imagine that two people who don’t want to stay or be together anymore must part acrimoniously. I now totally believe that they can go their ways and still be friends.

If we reflect on Chidu’s piece of today, the principle of not being hurtful to anyone stands out. That’s what’s lacking in both personal relationships and in our social fabric – and on social media – today. Gauri’s Life – and her death – would not have been in vain if we can bring this principle to play at least in personal equations when we can’t get along with someone.