Folks like RJ Balaji must help the youth focus on doing greater good that can change India forever.

This post is in continuation of my post of yesterday on Life having a Higher Purpose. I have been watching the Jallikattu protests in Tamil Nadu with curiosity. While the peaceful manner in which the protests have been held so far is commendable, I feel a great opportunity needs to be urgently leveraged. This opportunity is really about creating a mass, democratic movement that has the potential to change the socio-political landscape of not just Tamil Nadu, but of the entire country. But for this to happen, this youth movement must rise above temptations of petty, regional, jingoism and embrace a Higher Purpose.

So far the protests across Tamil Nadu are known to have a focus only on the Jallikattu issue. I feel this is a very myopic way to look at preserving Tamizh culture and to channelize youth energy. It is very disturbing when you consider that many – artists, intellectuals, commonfolk – really don’t appear to be seeing the bigger picture. I have a simple question: don’t #Manushanda and #Indianda come far ahead of the parochial #Tamizhanda war-cry? I don’t want to emphasize on the unconfirmed references to purported secessionist clarion calls by a section of the protestors who played up the Eelam card or held up pictures of the late LTTE commando Prabhakaran. I also don’t want to lament the behavior – again unconfirmed –of a section of the protestors who purportedly used abusive language in reference to PM Modi and CM O Paneerselvam. Such discordant notes are bound to be struck when so much energy comes rising up – without proper channelization, without a bonding glue, without a Higher Purpose. The only voice that made sense, though it may be accused of being unnecessarily rabid, was that of RJ Balaji. I totally agree with Balaji that the time has come for ordinary citizens to join the democratic process – first, by going beyond just voting in every election. He champions for us to stand up, even if it means protesting every single time an issue arises – and in India, there is an issue born or created almost all the time, 24×7 – and raise questions. And what better way to get started on this journey than by allowing ourselves to be led by the youth of our land? Yes, I have a fundamental disagreement with Jallikattu being a cause for an uprising. But somewhere, somehow, a beginning had to be made. It has so happened that Jallikattu has now united a diverse set of people to a cause. So far, the political class has been getting away with sacrilege and the murder of democracy because there was no movement that had managed to reach as far as this youth effort in Tamil Nadu has gotten. This is why this opportunity, of making #Jallikattu a lasting metaphor, must be seized, urgently, immediately. 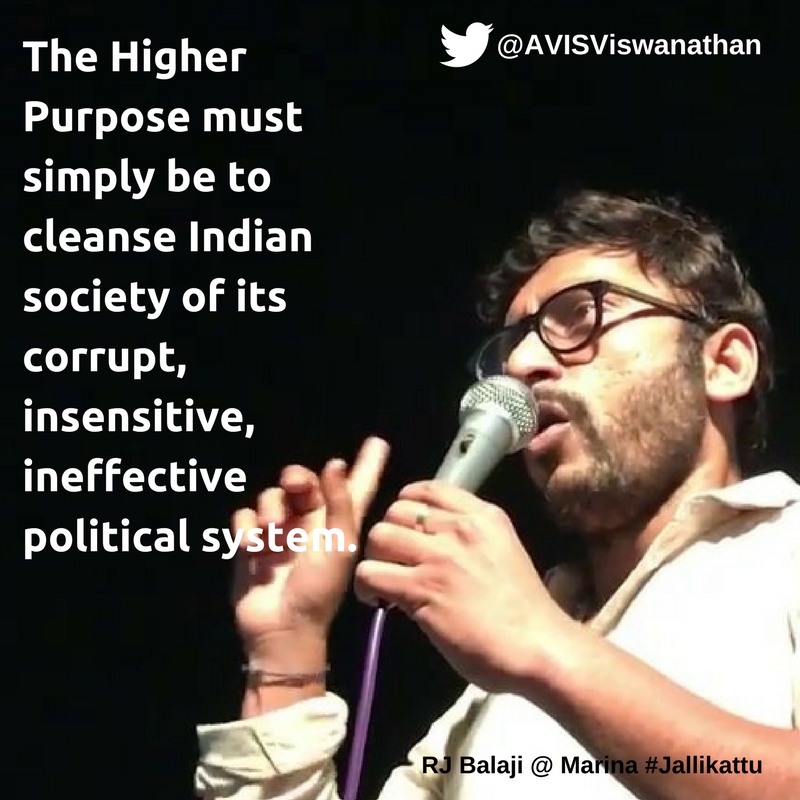 This is where a huge responsibility vests with people like RJ Balaji. There have been youthful voices like his in the recent past in India – but, at least to my mind, they have been laced with secessionist and communal flavors. Balaji, and a majority of the youth in the Tamil Nadu movement, have been, commendably, apolitical and non-communal. So, if anybody must be supported, it must be them.

We must all encourage and invite them to embrace a Higher Purpose. That Higher Purpose must simply be to cleanse Indian society of its corrupt, insensitive, ineffective political system. Here corruption does not refer to money bribes and illegitimate material accumulations alone, it also includes a corrupt thought process. When anything is taken up with Higher Purpose – which by character, by its very nature, goes beyond money, name, fame and power – it always succeeds. This is the only reason the Civil Disobedience Movement that Gandhi led succeeded – it got us our freedom! So, per me, embracing the Higher Purpose of cleansing our society means to create a nationwide movement that must aim to get elected only educated, honest, skilled representatives to both Houses of Parliament and to every State Assembly. That’s ensuring the selection and election of a few thousand people – from among 1.25 billion Indians. Extremely doable! I believe this is really what our youth want and are capable of achieving. I only hope they can define and internalize this Higher Purpose for themselves – for all of them, for all of us – and build a national movement. Only this will ensure that their energy is not frittered away and they remain united in the face of any pressure that the political class is bound to mount.