Skip to content
In the midst of all of our problems lies a very beautiful world. Simply, we don’t notice it!
Yesterday I was on a flight. The hostess did a particularly bad job of the announcements. The food was cold. My ear was blocked thanks to an infection I have been carrying. And my thoughts wandered, at 30,000 feet, to the slew of problems we are faced with. I tried attempting solutions to some of them by making a diligent list of them on my little Post-it pad. My problem solving skills were particularly challenged because the nature of the problems were so nscrutable. After about 30 minutes of concentrating intensely on those problems, I was no more wiser or relieved than before! Suddenly I was forced to look up.  Some activity across the aisle from my seat had drawn my attention.
What I saw blew my mind away. There was a very, very old lady, perhaps well over 90. She had very little hair left. But whatever she had was in a brilliant silver and was neatly combed and made her glow. Her skin was all shriveled. And hanging. She had no teeth. Even so, she appeared to be completely at peace with herself and her world. She was looking radiant and very beautiful. Her toothless smile made me come alive and connect with a higher energy. She was struggling though to stand up to walk to the washroom. The hostess, with the pathetic announcement skills, was helping her. When she realized, the lady couldn’t make it with just she offering her hand for support, the hostess reached out and embraced the old lady and walked her slowly to the washroom. They were back after several minutes. In that time I put my pen down and replayed the whole spectacle again in my mind’s eye. What I had witnessed was a beautiful spirit in the old lady and genuine human compassion (and not just the discharging of a professional responsibility) from the hostess. When the old lady was seated again, she held the hostess’ hand, smiled benignly at her and said, in a beautiful voice, in English: “My child, I love traveling. And I prefer to travel alone without having to depend upon anyone from my family. Because I know the world is full of such angels like you. Thanks for being so kind to me.” 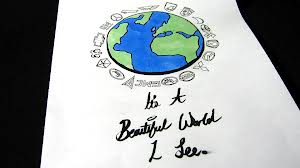 The irony struck me hard. Both the old lady and I were traveling together. We were literally seated next to each other, with only the plane’s aisle running in between us. Yet the world the lady inhabited seemed so much more beautiful and abundant than my own. For, if I had not looked up from my futile problem-solving attempt, I may have missed the beauty in the moment that I actually was so blessed to witness. An awakening and a learning dawned on me: The world we live in is the same. It is the same for the one who mourns and for the one who celebrates. It’s beauty doesn’t diminish ever. We actually see the world as beautiful, for the way it is, but in the throes of our problems, we hardly notice its beauty! So,we believe “our world” has lost its sheen. Because we see it with problem-tinted eyes and a depressed spirit! Alfred North Whitehead (1861~1947),English-American mathematician and philosopher, has summed it up perfectly: “Everything of importance has already been seen by somebody who didn’t notice it.”
The import here is not to say that we should not face our problems or attempt solutions. There’s only a humble submission that in doing that, don’t get so consumed, that you stop to pause and celebrate the magic and beauty of and in the Universe! When you allow yourself to notice the world you see, without judging whether you are in a frame of mind to celebrate it, you will open yourself up to such a whole new world of opportunity and a beautiful new way of living __ intelligently!
Follow The AVIS Viswanathan Blog on WordPress.com