Why suffer holding on to anything?

Watching the inauguration of the US President on Friday last, I could not but help reflect on the beauty of the American democratic system. Every 4~8 years it promotes the effective practice of detachment – not just for those administratively connected with the Presidency but for all American people. As Michelle and Barack Obama’s Executive One helicopter took off from Capitol Hill, I felt, the moment was poignant. “That’s it. The Barack Obama Presidency can never be back. America has to let him go. No choice,” I remarked to Vaani. I felt a lump in my throat, as did Vaani, as did perhaps so many millions of people across the world. But such is Life when it comes to the American Presidency. Which is why I feel it holds out a great lesson in detachment to all of us.

We often think of detachment as something which is beyond the reach of common folks like us. We think of it as the exclusive prevail of more evolved, spiritually-inclined people. But I think different. Each of us is capable of understanding and practicing detachment. All we need to do is to celebrate the impermanence of Life itself. If you are born, death is certain. So, when Life is impermanent, transient, why cling on to anything? In a way, one of the most powerful positions in the world – purely going by the worldly definition of power – has a limited-period tenure, between 4~8 years. So, why suffer wanting to hold on to anything – least of all material? 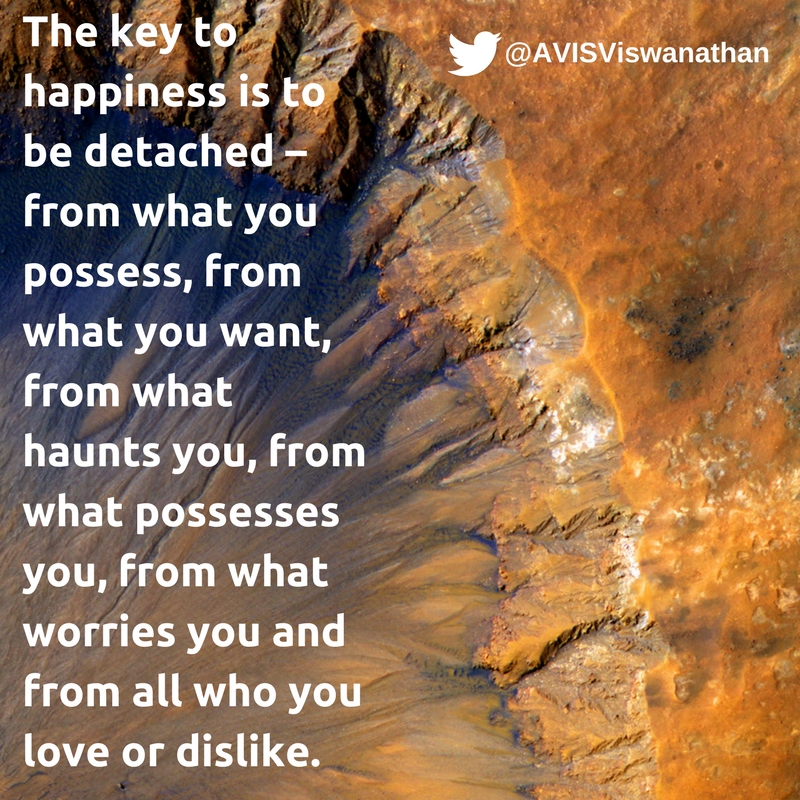 In a way, I guess guided detachment helps. Like in the case of the US Presidency. During the early months of our bankruptcy (read more here: Fall Like A Rose Petal), I found it very difficult to stop worrying. It seemed such a natural, normal, thing to do. When you don’t know what to do, you end up first worrying that you are clueless. Then you start being fearful. And you are soon pinned down and held hostage by your fears and your worries. It’s an ugly state to be in. I hated being that way. Then through my daily practice of mouna (silence periods), I learnt to postpone worrying. The more engaged I was in the beauty of the present moment – however imperfect it was, it was always beautiful – the more I was able to detach myself from my worries and fears. I told myself that we were waging a war. And to fight that war, Vaani and I needed to be in top gear – physically, emotionally, spiritually. So, every evening we came home battle-scarred, but we refused to let the pressure get to us once we sat down for dinner. This is how I trained myself in the art of detachment.

Detachment doesn’t mean you are irresponsible. Nor does it mean inaction. It simply means you are smart enough, intelligent enough, not to take Life so seriously that you stop enjoying the journey because you are obsessed with the reward – a reward that you cannot anyway take with you!

Arguing endlessly and being bitter is not going to change any reality.

Suddenly, the US of A is divided. Shockingly polarized. I have been to that great country so many, many times. And I love the people there immensely. Our son lives there, just as several members of our extended families do. Yet, I have never seen so much division out there, ever.

Just look at your Facebook feed and you will know what I mean. So many, many, many people hate Trump and fear ‘his’ America. Yet, an apparent majority sentiment against him, and all the fear-mongering and protesting, isn’t going to prevent Trump’s inauguration on January 20th next year. His election is an act of people’s will, of a duly laid out constitutional process. No amount of debate is going to change it. No protests are going to make things any better or different for the protestors.

Free speech is enshrined in most democracies in the world. And USA’s is a beautiful, thriving democracy. Yet, even as people are expressing themselves freely, there’s a great deal of angst and intolerance that’s visible, palpable. Political ideology has divided people at a social level. And that’s a sad thing to happen. I believe a conversation that cannot allow a candid, calm and constructive discussion is not a mature one. What we all have to recognize is that whether someone supports one leader or the other, the core issue here is that everyone want better leadership. Each one feels the person he or she is inspired by is a better leader. Now, if you don’t support someone’s choice of leadership, discuss and debate about the leader and leadership – don’t rubbish the person you debate with hoping to win an avoidable, vitriolic argument. This serves no purpose. Actually, honestly, even social media posts serve no purpose in such debates. But they do serve as a means of expressing ourselves freely. Such expression must be respected and any personal or acerbic remarks must be avoided ideally and surely expunged!

I have learnt that arguments over anything – not just over a political or academic or religious or ideological viewpoint – serve no purpose. They end up raising the decibel level and increasing acrimony. An argument is really an ego game. It is always fought over who is right than what is right. Interestingly, at a deeply spiritual level, even right and wrong is relative. What may be right to someone may always appear wrong to someone else. Or what may be right now to someone may appear to be wrong to the same person at another time. So, when what is right is debatable, what’s the point in deciding – that too, over a painful, often wasted, argument – who is right?

Osho, the Master, explains this beautifully: “Life is not divided into black and white – a lot of it is more like gray. And if you see very deeply, white is one extreme of gray and black is another extreme, but the expanse is of gray. So one can see it as white and one can see it as black. It is as if a glass is there, half full, half empty. Somebody says it is half full and this is the truth and somebody says it is half empty and this is the truth… and they start fighting. All arguments are more or less like that.”

The upcoming Trump Presidency offers us all a chance to evolve into being more tolerant. There’s an opportunity here for us to learn to avoid the urge to belligerently argue. And stop wanting to be right and to be seen as right. If you have an opinion that is fair and constructive, and if you think all parties in the discussion will have the maturity to accept it, express it. If you believe that maturity is lacking in the forum, exercise your right to not participate. Ideally every perspective shared in a discussion must be constructive and must create value. If you can’t ensure that, it’s a simpler and intelligent response to just remain silent.