Skip to content
Peace arrives when you stop resisting, stop fighting and stop struggling with Life.
Each of us is fighting something or the other. All the time. Someone fights for health. Someone else for wealth. There’s someone fighting for dignity. And someone for identity. Someone out there fights for companionship. Another soldiers on for acceptance. Yet a factor that’s common to all constituencies is that everyone, despite their individual fights, wants peace. You look around. Ask around. And you will find that almost everyone wants just peace. And they will all talk about inner peace __  bliss, joy, plain, good ol’ happiness.
But you can’t pursue peace when you are struggling with Life, fighting its every dimension. You cannot be angry with your situation in Life and expect to find peace in it at the same time. Peace will come, when you suspend all hostility in your mind, and through that act, make your immediate circle of influence peaceful. Peace has a price to be paid for, and that is to be accepting of a situation or a person or an outcome. Many people wonder what is the way to peace. And the simplest answer to their query is what Vietnamese Buddhist monk Thich Nhat Hanh champions: “Peace is the way!” 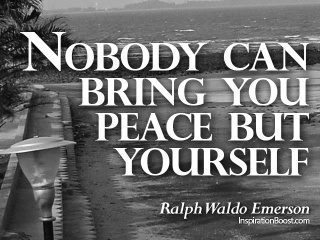 But by ceasing to fight, are you embracing inaction? And isn’t inaction equal to committing hara-kiri? Let me clarify: ceasing to fight is not inaction. It means acceptance. You can be accepting of a situation, be peaceful, and yet work towards changing it. They are not mutually exclusive. On the other hand, they are complementary. The other day, at a coffee shop, I noticed a young couple argue with each other at another table. The lady was agitated. Often gesticulating wildly, raising her voice just so much that others around could hear and perceive that she was upset with the gentleman. The man, on the other hand, was stoic. He was calm and in control of himself, even if he was not in control of the situation. At the end of their discussions and arguments, I felt nothing had been resolved. Things were where they were when they came in. But the lady stomped out in a huff, and I believe she must have been continuing to fight the situation, or the man, in her mind. The man was calm, perhaps not happy either with the way the meeting ended, and made a slow, peaceful exit. He may also have felt that things could have been better, but for sure, he wasn’t feeling worse. He was peaceful. He wasn’t fighting. Yet he was not abstaining from action. Coming to the meeting, making an attempt, while staying calm, was indeed action.
We too can embrace this way of living. Simply, don’t start with asking ‘WHY?’ of Life at each of its twists and turns. Exclaim instead, ‘Interesting, so, we have a situation…!’, and mobilize your action to resolving it. Even a fight for a nation’s independence can be a peaceful__and successful__one. Gandhi proved it and so did 300 million of his followers, fellow Indians, back then. The same principle applies here. End all violent thinking __ about anyone or anything __ and approach each problem or situation with complete focus and total equanimity. Remember: to find peace, inner peace, peace is the way!
Follow The AVIS Viswanathan Blog on WordPress.com
Follow @AVISViswanathan